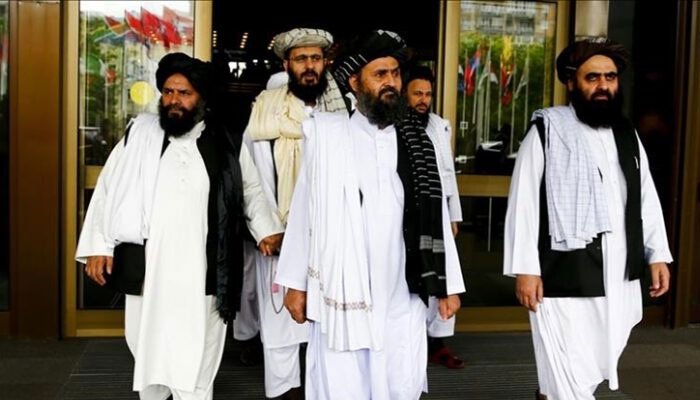 New Delhi: The Taliban has been criticized for including some notoriously shady characters in Afghanistan’s acting government, perhaps none more than Sirajuddin Haqqani, a designated terrorist last photographed hiding behind a plant, RFE/RL reported.

In his first public appearance since he was named the Taliban’s interior minister in early September, Haqqani on October 19 praised suicide bombers and promised money and land to a packed house of their surviving family members.

In an official photo of the event at Kabul’s Intercontinental Hotel, the target of deadly Taliban attacks in 2011 and 2018, Haqqani can barely be seen sitting behind a strategically placed floral arrangement onstage, the report said.

Despite the obvious effort to shroud Haqqani’s appearance, closer inspection reveals the most distinct image of Haqqani’s face seen in recent years.

Another camera angle shows the events’ decorations, VIPs, and Taliban special-forces troops brandishing recently pilfered US military gear much more clearly. That is, except for Haqqani, whose body is shown but whose face has been completely photoshopped out of the scene, the report added.

Other photos show every wrinkle and fold on Haqqani’s beige shirt, brown vest, and black turban. But aside from his hands, a glimpse of an ear, and traces of his trademark dark beard, Haqqani’s face is again either blurred or artfully hidden behind warm embraces with attendees of the event, the report said.

The photos mark the second attempt by the Taliban to keep Haqqani’s face out of the camera’s view since the extremist group seized power on August 15.

During an introductory meeting of the Interior Ministry on September 10, only the back of Haqqani’s head can be seen as he addressed his new staff wearing a similar outfit, the report said.

But the involvement of Haqqani — who heads the Haqqani network — has raised serious questions as to the Taliban’s commitment to its claims of reform.

The acting interior minister, who is the son of the deceased Haqqani network founder Jalaluddin Haqqani — is among the FBI’s most-wanted fugitives.

Some on Twitter have speculated that Haqqani’s current appearance is being obscured to protect him from those who might want to cash in on the reward money.

Multiple sources in Kabul have told RFE/RL that Haqqani frequently changes location and keeps his movements secret out of fear that Washington will target him using remotely piloted drones.

Others on Twitter have suggested that the Taliban is attempting to portray Haqqani as a divine leader or that the images are being blurred in keeping with the group’s previous stance that photography was forbidden under its strict interpretation of Islamic law.

Haqqani is not the only Taliban official working in the shadows. The militant group’s newly named supreme leader, Mullah Haibatullah Akhundzada, has only been seen on posters even as government appointments are attributed to him amid reports that he died a year ago.

And the whereabouts of Mullah Yaqoob Omar, the 30-something son of Mullah Omar who has been named the militant group’s caretaker defense minister, is essentially a mystery, the report said.

But his depiction of suicide bombers as “heroes of Islam and the country” during the October 19 event at the Intercontinental Hotel — where 42 people were killed by Taliban gunmen in 2018 — fell on deaf ears to those outside the venue.

Reactions to Haqqani’s appearance — however blurred — were harsh among Afghans who have been victimized by suicide attacks.

“Thousands of young people and families were killed,” Ibrahim, whose brother Khajeh Isa was killed in a suicide attack in the northwestern Herat Province in 2009, told RFE/RL. “Children, the young, and the old were martyred.”

“We see that today those who committed suicide [bombings] are being honored in the name of martyrdom,” said Ibrahim, whose full name has been withheld out of concerns of possible retribution against him. “Unfortunately, this is far from humanity and religion… No conscience accepts that suicide is a part of Islamic law.”