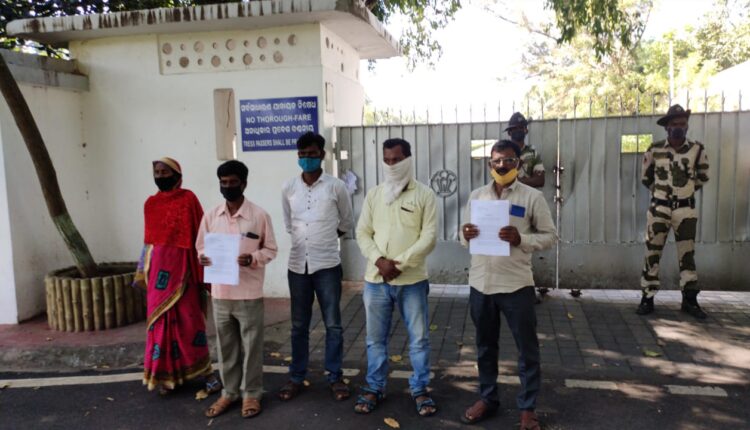 Bhubaneswar:  Trouble further mounted for Jagi Mangat Panda and his husband and BJP National Vice-President Baijayant Panda, who have been in news recently over Sarua land scam, after contractual employees of Tarang (Odisha Infratech Pvt Ltd) Sarua project sought invention of Odisha Chief Minister, Governor and the Union Home Minister to help them get their dues and permanent jobs in the company.

After sitting on a peaceful dharna, the contractual employees submitted a memorandum to CM Naveen Patnaik, Governor Ganeshi Lal and Home Minister Amit Shah appealing them to ensure that the Baijayant Panda’s company provides them their salary and jobs back.

The activists alleged that they gave their lands to the company handling the project in Sarua in Khordha district on the assurance of getting jobs. However, the company provided them only contractual jobs. Besides, it did not pay salary during the lockdown this year. Despite Central and State Government’s  guidelines instructing that salaries should be paid during the lockdown, no salary was paid despite repeated demands, they added.

They further alleged,  “some scheduled caste persons had complained against the company about fraudulent transfer of their lands. The company wanted us to make the people withdraw the case. When we could not do the same, they sacked us,” alleged the employees.

They further mentioned that Baijayant Panda’s father-in-law Randhir Singh had threatened and harassed them when they were staging a peaceful Dharna in front of the Tarang Sarua project gates.
However, they later had withdrawn the protest after after Deputy Labour Commissioner assured them of a solution on November 11.

Claiming  that the lands that they have given for the project was their only source of income, the agitators asked as to why they have been thrown out of the jobs, and further demanded that Baijayant Panda give them their jobs back.