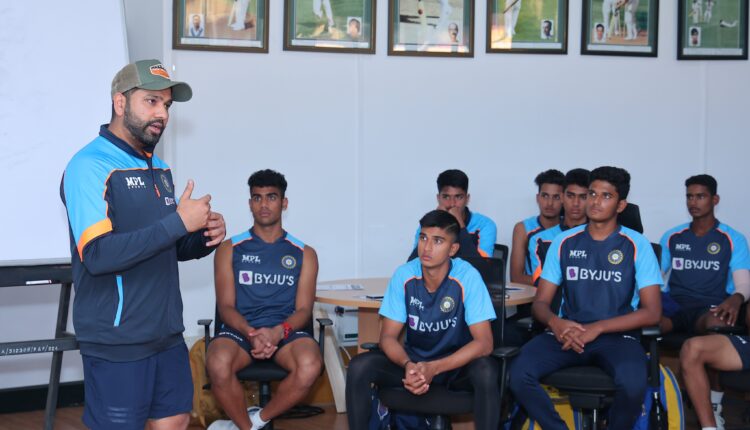 New Delhi: India’s white-ball captain Rohit Sharma, who is undergoing injury rehabilitation at National Cricket Academy (NCA) in Bengaluru on Friday interacted with the U-19 India team and gave them some ‘priceless lessons’ ahead of the Asian Cup.

BCCI took to social media to share pictures of Rohit addressing the team of youngsters who are at the NCA, preparing for the U-19 Asia Cup, starting December 23 in the UAE.

“Priceless lessons. #TeamIndia white-ball captain @ImRo45 made most of his rehab time as he addressed India’s U19 team during their preparatory camp at the NCA in Bengaluru,” the BCCI wrote along with the pictures.

The 34-year old Rohit and star all-rounder Ravindra Jadeja, who have been ruled out of the upcoming three-match Test series against South Africa due to injuries, were earlier seen at the NCA with India U-19 captain Yash Dhull in his social media posts.

“A big thanks to Rohit Sharma for taking time from his rehab to talk to the Asia Cup-bound Under-19 squad at the NCA. I am sure the boys would have gained immensely from Rohit sharing his wisdom and experiences,” tweeted Laxman

The opener was named as India’s full-time ODI and T20I captain by the Selection Committee on December 8 while revealing the squad for the Test series in South Africa. He was also elevated as the vice-captain in the longest format but a hamstring injury during training ruled him out of Tests against Proteas.

Rohit is expected to recover from the injury before the start of the ODI series against South Africa. If fit, Rohit will lead India in the 50-over format for the first time as full-time captain.