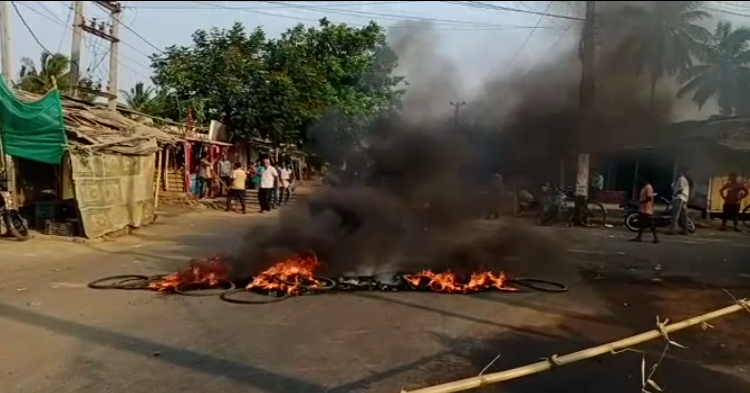 According to reports, Kalia Pradhan, a resident of Erabanga village, was running a tent house business. He had been to Balikandala village for a wedding event on Friday.

He was allegedly attacked by a DJ owner following a heated argument over tearing of tent clothes during marriage procession in the village.

During squabble, the DJ owner allegedly stabbed the tent house owner in head with a dagger. Later, the accused ran his DJ vehicle over the victim leaving him in a pool of blood.

The locals rushed the victim to the Community Health Centre (CHC), Gop, where the doctors declared him dead.

Reports said that police officials reached spot late after the incident for which and villagers of Erabanga allegedly heckled the cops. Expressing outrage over the murder, irate locals hit the streets at Begunia Chhak by burning tyres and disrupting vehicular traffic on Pipili-Konark Road.

Police source said that the DJ owner has fled from the scene and one his vehicles has been detained.

“Discussion is underway with the protestors to bring the situation under control. We wish cooperation from Erabanga villagers. We have detained one vehicle belonging to the accused DJ owner. Efforts are on to bring the accused to the police station,” Gop Police Station IIC said.