ODISHA LATESTTOP
By Sambad English Bureau On May 13, 2020
Share

Bhubaneswar:  Even as the Odisha Government, a few days ago, claimed that the COVID-19 curve was flattening in the state, the sudden spurt  in the number of positive cases seems to be alarming.  The state reported the highest spike of 101 positive cases in the last 24 hours with Ganjam remaining in the top with 210 cases.

Thereafter, it took only three days where the number climbed to 300-mark by May 9 and in another two days to make it to 400 by May 11. And, the total count crossed 500-mark after the state reported the highest 101 positive cases in a single day on May 13 ( Ganjam-52, Balasore-33, Jajpur-7, Sundergarh-7 and Keonjhar-2)

Ganjam, which was in Green  zone registered a quantum jump in positive cases making it to the Red Zone category.  With the first case reported on May 3, the district has so far reported 210 cases in just 11 days. The majority of Surat returnees to the district have tested positive for the deadly virus.

Of the total 538 cases in the state,  249 are Surat returnees, 41 Nizamuddin returnees, seven  foreign returnees, 140  West Bengal and Jharkhand returnees, five Karnataka returnees, two returnees each from Bangalore and Tamil Nadu, and one returnee each from Kerala and Maharashtra.

The month-wise tally shows four persons tested positive in March while the number of confirmed cases was 139 in April and 395 so far in May. The state has reported three deaths and nearly a fifth of the positive cases have recovered taking the number to 116.

It is pertinent to mention here that Union Health Minister Harsh Vardhan recently had stated that Odisha is going to be the next hotspot of the deadly virus.

Here’s the district-wise tally so far: 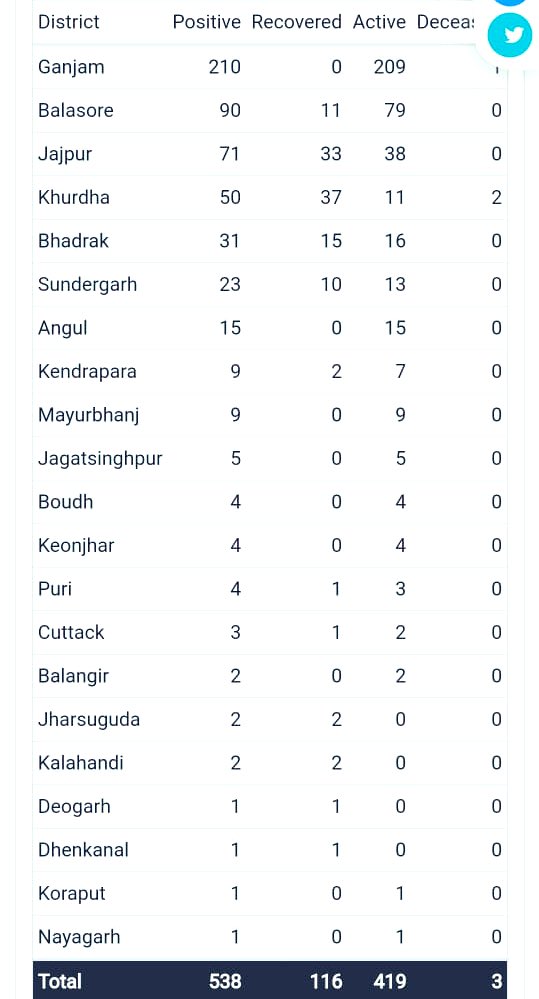