‘The Ice Age Adventures of Buck Wild’: Only diehard fans will love reliving antics of their favourite characters 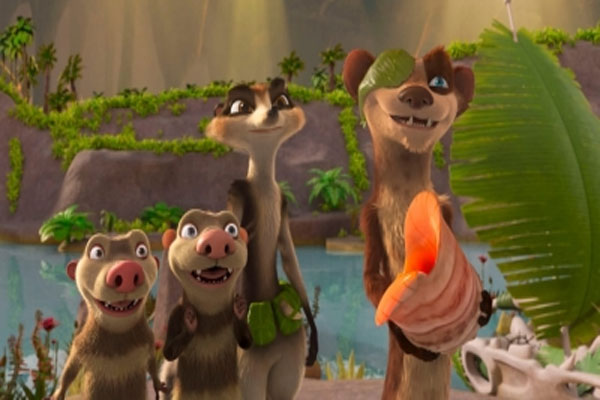 ‘The Ice Age Adventures of Buck Wild’ is the sixth film of its franchise, and like its earlier editions, it is a cute and simple animation film that acknowledges family loyalty and belonging.

Narrated from the mammoth Ellie’s point of view, voiced by Dominique Jennings, who bookends the narrative through a fresco inside the cave to say: “Everything changes and change is scary, but it is the way of the world. It helps us to grow and be who we are.”

Thereafter, the narrative is about how Ellie’s adopted, thrill-seeking, but goofy possum brothers Crash (Vincent Tong) and Eddie (Aaron Harris) set out to become independent and find a place of their own in the wide-open world.

Their action is provoked by Manny (Sean Elias-Reyes), the gloomy mammoth and Ellie’s love interest, who tells them off for being too carefree and irresponsible, unlike the rest of their so-called family.

Soon, the possum brothers find themselves trapped in the Lost World, a massive cave inhabited by dinosaurs who co-exist with giant spiders and enormous carnivorous plants.

The dinosaurs pursue them and as they escape, a crazy and funny chase ensues. How Buck Wild (Simon Pegg), the one-eyed, swashbuckling, adventurous weasel, rescues them from the dinosaurs, and especially from Orson (Utkarsh Ambudkar), their large-headed leader, forms the crux of the narrative.

There is a certain visual appeal to the film. The characters are cute and colourful. Each one of them is distinct and attractive. The animation and the setting are painstakingly created and are picture-perfect.

The voices of the ace star cast match perfectly with that of the characters and the soundtrack further elevates the viewing experience. Humour comes in the form of conversational banter and physical comedy.

Unfortunately, the script by Jim Hecht, William Schifrin and Ray De Laurentis, though packed with worthwhile messages, and some good laughs, offers nothing novel or stimulating. It caters to an audience in their pre-school years, but diehard fans will love reliving the antics of their favourite characters.