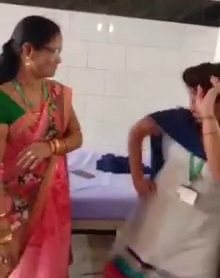 Bhubaneswar: After a TikTok video of four nurses dancing in the hospital premises went viral on the social media, TikTok videos of three women attendants dancing inside the orthopaedics department of SCB Medical College and Hospital in Odisha surfaced on Friday.

Sources said the three attendants employed by a private organisation to take care of patients made the videos while working in the orthopaedics department.

Parbati Samal, one of the women attendants, said she did not have any idea about the video.

“I was standing while another girl was dancing and shooting the video. I have no idea about the video,” said Samal.

SCB Medical and Hospital superintendent C.B.K. Mohanty said the matter will be probed.

“I don’t know about the video. I will investigate the matter,” he added.

Some TikTok videos of four nurses dancing in Malkangiri district headquarters hospital (DHH) have gone viral. In the videos, the nurses were found dancing inside the Sick and New Born Care Unit (SNCU) of the hospital.

TikTok video row: Use of mobile phones restricted inside…

The hospital authorities on Thursday sent the nurses on compulsory leave for an indefinite period.

Malkangiri Chief District Medical Officer (CDMO) Ajit Kumar Mohanty informed that action will be taken against the nurses after an investigation into the incident is over.

Health Minister Naba Kishore Das has also sought a report on the incident.

Meanwhile, the nurses on Friday admitted their mistake in shooting the video in the official uniform inside the hospital.

“Shooting the videos inside the hospital was a mistake and we will never repeat it,” said Biswas.