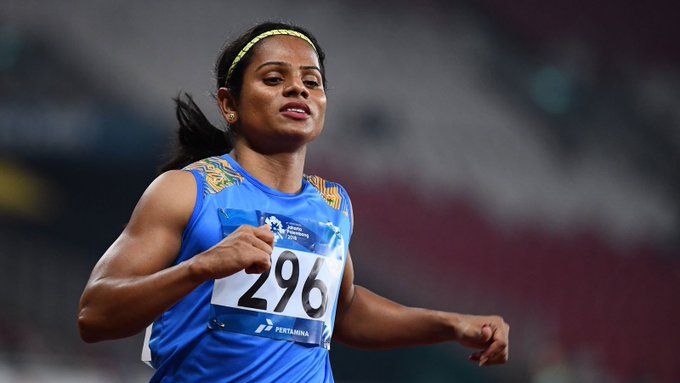 She clocked 11.54s, which is well behind her personal best of 11.17s. Had she performed close to her best mark, she would have been ranked fourth or fifth in the heat with a spot in the semi-finals.

She will next participate in the 200m heats.

#IND‘s national record holder in women’s 100m @DuteeChand falls short of striding her way to the next round as she finishes seventh with a timing of 11.54s in heat 5️⃣

Dutee, the only athlete from Odisha to participate in Tokyo Olympics, had qualified for the Women’s 100m and 200m events via world ranking quota.

Earlier on June 21, she had set national record in Women’s 100m event by clocking 11.17 seconds at the Indian Grand Prix-IV organised by the Athletics Federation of India in Patiala.

Seven heats of the Women’s 100m event will be held today. The format of the Heats dictates that the top three finishers of each heat qualify directly for the final. The next six best candidates join them.

The semi-finals and final of the event are scheduled to be held on July 31(tomorrow).

Similarly, Round 1 and semi-finals of Women’s 200m event are scheduled to take place on August 2 while the final will be held on August 3.