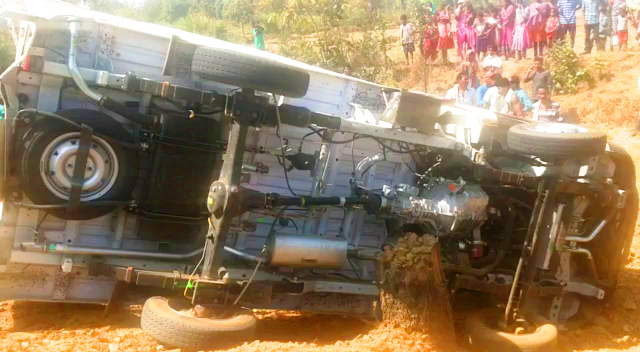 Malkangiri: At least four persons were killed and around 10 others sustained critical injuries after a pickup van they were travelling in turned turtle near Kathiguda in Malkangiri district today.

The identity of the deceased is yet to be ascertained.

Sources said around 15 people of Sananayakguda village under Pangam Gram Panchayat were travelling in the pickup van to attend a political programme at Mathili. The incident occurred after the driver of the pickup van lost control over the vehicle, following which it overturned.

As per latest information, all the injured persons have been admitted to Mathili Community Health Centre (CHC) for treatment.

2 dead, another injured as bike plunges 10 ft down in Odisha

The driver of the vehicle was detained. “A case has been registered and investigation is underway into the incident,” said Malkangiri SP Jagmohan Meena.

Later in the evening, Chief Minister Naveen Patnaik announced an ex-gratia of Rs 2 lakh each for the next of kin of deceased and free treatment for all injured.

CM @Naveen_Odisha expressed grief over the death of five people in a road accident in Malkangiri and announced ex-gratia of ₹2 lakh each for the next of kin of deceased from CMRF and free treatment for all injured.

Woman gang-raped by 12 at farmhouse