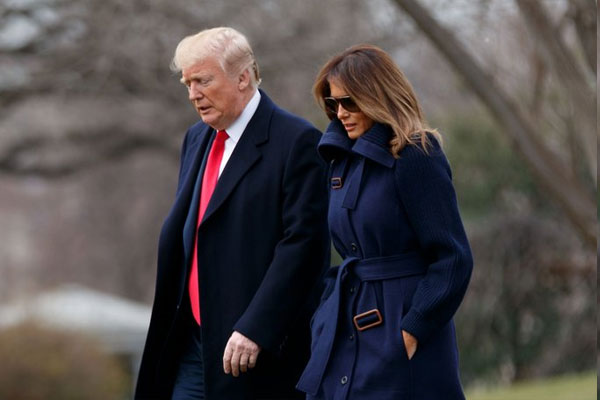 Washington:  US President Donald Trump and his wife Melania have tested positive for the novel coronavirus, the first couple announced in separate social media posts, adding that they were “feeling good” and will “quarantine at home”.

Taking to Twitter late Thursday night, Trump said: “Tonight, @FLOTUS and I tested positive for Covid-19. We will begin our quarantine and recovery process immediately. We will get through this together.”

Also in a tweet shortly, the First Lady said: “As too many Americans have done this year, @potus & I are quarantining at home after testing positive for Covid-19. We are feeling good and I have postponed all upcoming engagements.

“Please be sure you are staying safe and we will all get through this together.”

The news was also confirmed by presidential physician Sean Conley in a memo released by the White House.

“The President and First Lady are both well at this time, and they plan to remain at home within the White House during their convalescence.

“The White House medical team and I will maintain a vigilant watch, and I appreciate the support provided by some of our country’s greatest medical professionals and institutions.

“Rest assured I expect the President to continue carrying out his duties without disruption while recovering, and I will keep you updated on any future developments,” Conley added.

After announcing the President’s diagnosis, the White House also issued a new schedule saying that several events have been cancelled, including a fundraiser in Washington and a campaign rally in Florida.

The development comes after the President had said earlier on Thursday that he planned to quarantine after Hope Hicks, one of his closest aides, tested positive for the virus which has so far infected 7,277,352 people in the US and killed 207,791 others, making it the worst-hit country in the world.

“Hope Hicks, who has been working so hard without even taking a small break, has just tested positive for Covid 19. Terrible. The First Lady and I are waiting for our test results. In the meantime, we will begin our quarantine process,” Trump had said in a previous tweet.

Hicks had travelled with the President on Air Force One earlier this week, an informed source told The Hill news website.

She is the latest White House aide to test positive for the virus.

In May, two White House staffers, including a member of the Navy who serves as one of Trump’s personal valets, tested positive, and in July a cafeteria employee on the White House grounds had contracted the virus as well.