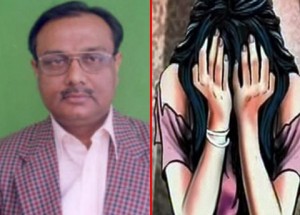 “B.B. Mohanty, who surrendered on Monday evening, was produced in the court of Metropolitan Magistrate here on Tuesday which remanded him to a two-day police custody,” Nem Singh, the Sodala Assistant Commissioner of Police, told IANS.

He will be produced before the court again on November 23.

Mohanty, who had been absconding since 2014, “came to the Sodala ACP office late Monday evening and surrendered”, Deputy Commissioner of Police, Jaipur South, Yogesh Dadich said.

In January 2014, the woman who hailed from Uttar Pradesh accused Mohanty of raping her. The incident had taken place in 2013.

According to the FIR lodged at Mahesh Nagar Police Station through a court order, the girl accused Mohanty of repeated sexual exploitation in a flat near New Sanganer Road that allegedly belonged to him, by assuring her of help in clearing the IAS examination.

The girl in her complaint said she was staying in Jaipur and pursuing MBA and Mohanty lived nearby. Mohanty at that time was the Chairman of Rajasthan Civil Services Appellate Tribunal.

She stated that Mohanty introduced himself as a senior IAS officer and persuaded her to appear for the IAS examination. Mohanty also told the girl that he knew people in the selection panel and assured her that he would see to it that she cleared the examination.

The girl fell into his trap.

On the pretext of giving her notes, Mohanty invited her to the flat where he raped her. He did not stop there as he sexually exploited her a few times more, she said in her complaint.

After the case was registered, Mohanty did not give any statement to the police.

As soon as the charge was levelled aginst him, the government suspended Mohanty. Since then he had been absconding.

Later in 2014, a city court had also issued a non-bailable warrant against Mohanty for not appearing before the police for questioning. (IANS)

3 Odia girls step in to stop child marriages in Bhubaneswar and how!

Tribal boy from Odisha excels against all odds