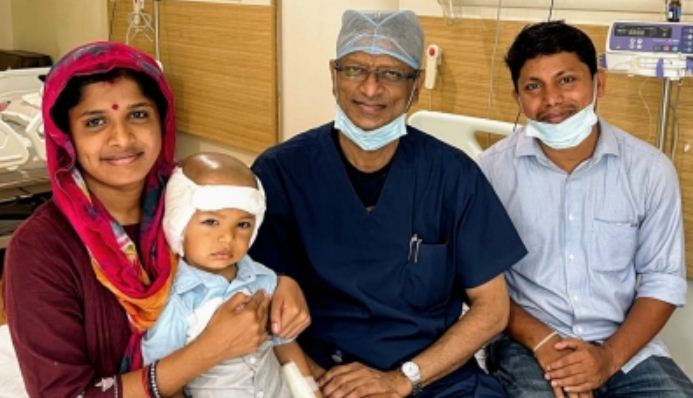 The toddler is the youngest recipient of this device simultaneously implanted bilaterally with the most advanced sound processor technology with wireless (off the ear) speech processors in Tamil Nadu.

According to MGM Healthcare, the toddler was diagnosed with congenital deafness during a routine screening of speech and hearing assessment after birth.

The baby boy was monitored at regular intervals and no improvement in his hearing was observed despite the use of best available hearing aids.

The baby’s family consulted the doctors at MGM Healthcare who told the former that cochlear implantation was the only viable remedial option to avoid complete deafness with impairment of speech and communication.

This is one of the most advanced available technology today and comes with up to 3 tesla MRI compatibility, wireless sound processor (off the ear), is functional under water, equipped with Bluetooth connectivity and can be operated with rechargeable batteries.

These implants eliminate the hassle of changing batteries, wearing the speech processor behind the ear and cables which used to be the case in the earlier models of implants.

According to him, bilateral cochlear implantation in the very young child, is a proven procedure that can improve a patient’s hearing and quality of life.

In this case, there was significant hearing loss in the toddler’s ears and hearing aids didn’t have the desired impact on the child’s hearing. Through this surgery, the implants overcome the problem by interacting directly with the auditory nerve, capture the sound, process and electrically stimulate the nerves, Mohanty said.

The toddler will undergo programmed auditory verbal therapy sessions to aid him in improving his communication and speech abilities in due course of time, Mohanty added.

He also thanked the donors and philanthropists who organised a crowd funding programme to meet the cost of entire treatment.