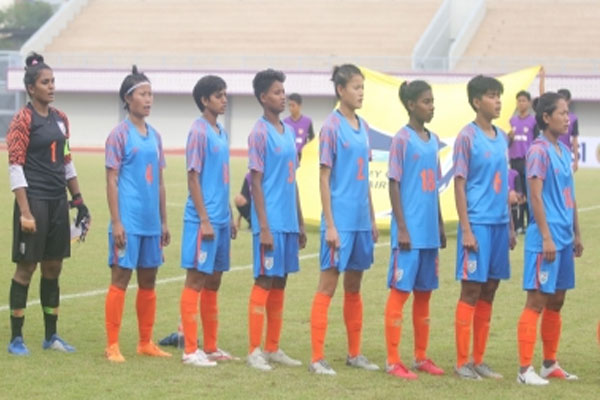 New Delhi: The India U-17 women’s football team will undergo a 10-day camp in Kalyani, West Bengal as part of their preparation for next year’s FIFA World Cup.

The India U-17 women’s team has already been in camp for the last four months, and after a brief break, the players will once again assemble in Kalyani on November 9.

The probables in the camp will be divided into four different teams, who will play each other in the round-robin format on November 11, 13, and 15.

Coach Alex Ambrose, who recently led India to the SAFF U-15 Women’s Championship 2019 title last month, believes that this tournament will help the coaching staff gauge the talent pool that they have at their disposal.

“The tournament in Kalyani will open up a lot of avenues for us. We have already had a set bunch of players for four months now but this will allow us to take a look at other players as well,” said Ambrose. “This is the future of women’s football in India, and we need to build them up in the best possible manner, in order to further improve.”

The coach also believes that the 10 days in Kalyani will be crucial for the girls who did not get much game-time in the previous exposure tours or in the SAFF U-15 Championship.

“Also, for the girls who did not get much match-time in the exposure tours or in the U-15 SAFF Championship, it is a good opportunity to show what they have got,” he rounded off.