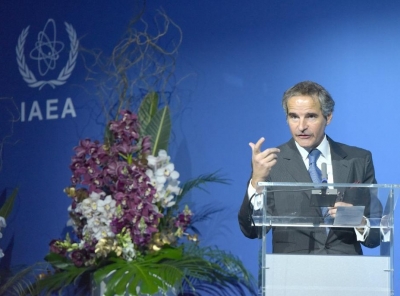 Vienna: A team of inspectors from the Vienna-based International Atomic Energy Agency (IAEA) will visit two sites in Ukraine at the request of the government in Kiev, the chief of the UN nuclear watchdog said in a statement.

In the statement issued on Monday, IAEA Director General Rafael Mariano Grossi said the agency is aware of statements made by Russia on Sunday about alleged activities at the two nuclear sites.

Grossi confirmed that both locations are under IAEA safeguards and have been visited regularly by the agency inspectors.

He added that the IAEA received a written request from Ukraine on Monday to send teams of inspectors to carry out verification activities at the two locations.

“The IAEA inspected one of these locations one month ago and all our findings were consistent with Ukraine’s safeguards declarations,” said the Director General.

“No undeclared nuclear activities or material were found there.”

The IAEA is preparing to visit the locations in the coming days, he said, adding that the purpose of the safeguards visits is to detect any possible undeclared nuclear activities and material.

Grossi’s announcement comes amid Russian accusations that Ukraine is preparing to use ‘dirty bombs’.

Dirty bombs contain radioactive material, such as uranium, which is scattered through the air when its conventional explosive detonates, the BBC reported.

They do not need to contain highly refined radioactive material, as is used in a nuclear bomb, which makes them cheaper and easier to manoeuvre.