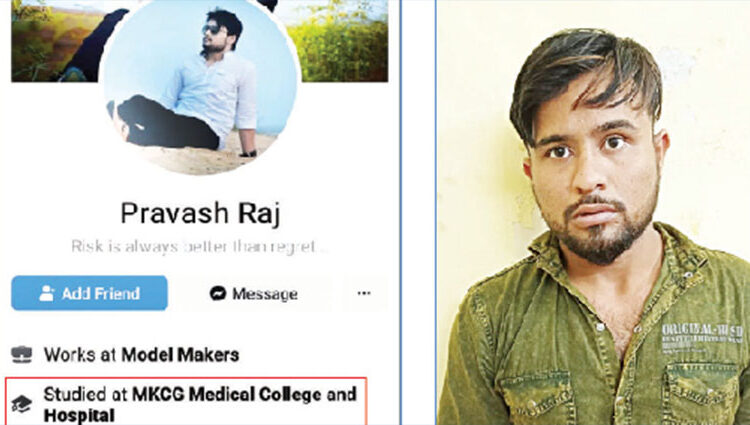 Bhubaneswar: The Saheed Nagar police have arrested an under matric youth of Badamba area in Odisha’s Cuttack district for allegedly duping more than 100 girls of money and valuables after posing as a medical student. The accused has been identified as Pravash Das (28).

As per police sources, Pravash used to befriend girls on social media platforms and matrimonial websites by identifying himself as a medical student of the MKCG Medical College and Hospital, and dupe them subsequently after meeting the victims.

As per a complaint lodged by one of the victims with the Saheed Nagar police recently, Pravash had developed friendship with the girl, a resident of Bhubaneswar, through Facebook and invited her to meet him at the Esplanade One mall in the city.

As she reached the mall, Pravash took her to a garment shop saying that he wanted to gift her a dress. After the girl selected a dress and went into the trial room, he fled the place with her money purse and mobile phone, which was handed over to him by the victim.

Being unable to find Pravash after coming out of the trial room, the girl telephoned him from the mobile phone of an employee of the shop, but in vain as the device was found to be switched off.

Realising that she was cheated, the girl then lodged a police complaint in this regard. Police had registered a case and started an investigation into the matter. During probe, police came to know about the presence of the accused in Balasore, where he was planning to dupe another girl.

The Saheed Nagar police nabbed Pravash before he could commit another crime. While questioning him, cops came to know that he has already duped over 100 girls of lakhs of rupees, mobile phones, gold ornaments and valuables in similar way.

Police have seized four costly mobile phones from his possession. Several cases are pending against him in different police stations in Cuttack and Jagatsinghpur districts. He was earlier arrested thrice.