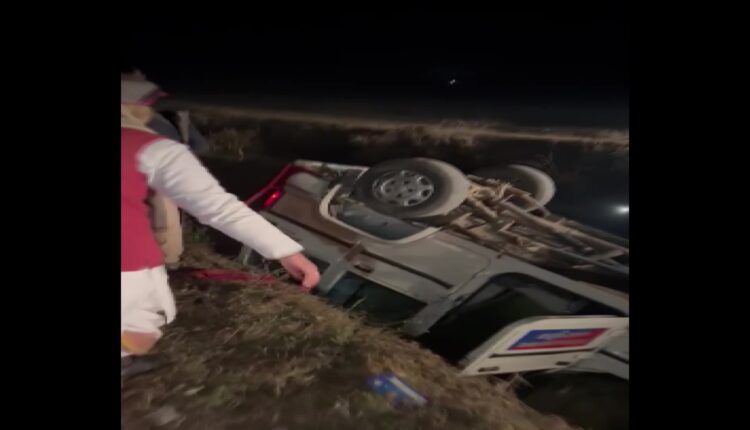 Patna: An escort vehicle in the convoy of Union Minister of State (MoS) Ashwini Choubey met with an accident wherein five policemen were injured.

The accident happened late on Sunday night while the Union Minister was on his way from Buxar to Patna. The vehicle overturned and fell into a pit.

The Minister shared the video on Twitter in which he could be seen inspecting the escort vehicle that was overturned.

The policemen were deployed in the Koransarai police and the Innova car in which the Union minister was boarded was just behind the escort car. The injured policemen were admitted to Dumraon sub-divisional hospital and two were in critical condition.

Following the accident, the personal security guards of Chaubey along with his other aides rescued them and admitted them to the hospital.

“The police van fell into the pit filled with water. Our security personnel and other supporters who were travelling with me broke the wind shields of the vehicle and rescued them. Two of the cops have sustained serious injuries,” Chaubey said.

Chaubey further said that as the two police personnel had serious injuries, they were taken to Patna AIIMS for better treatment.

The accident happened at the Mathila-Narayanpur road near Dumraon.

Ashwini Kumar Chaubey is MP of Buxar and minister of state for environment and forest ministry in the Narendra Modi government. He came to Patna to meet with the agitating farmers in Chausa and faced stiff resistance from them a few days ago.