ECONOMYODISHA LATEST
Sambad English Bureau Published On : May 2, 2022 at 1:29 PM 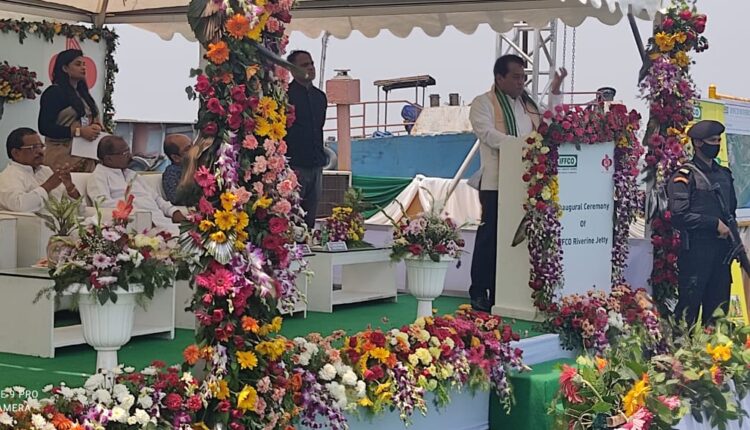 Paradeep:  The newly-developed, as well as Odisha’s first ever riverine jetty, was on last Monday inaugurated at the prime port city of Paradeep by Union Minister for Ports, Shipping and Waterways & AYUSH Sarbananda Sonowal, in presence of Minister of Commerce & Transport, Planning & Convergence Padmanabha Behera, and Minister of State, I&PR, Water Resources, Government of Odisha Raghunandan Das, and local MLA Sambit Routray.

Inaugurating the riverine jetty, the Union Minister for Ports, Shipping and Waterways & AYUSH said that Paradeep will be one of the best destinations for maritime trade and forge better Exim (export & import) relations with the neighboring countries.

The riverine jetty will open up a new dimension to the transport sector with the use of a multi-modal transport system. This will also help boost the country’s economy in multiple ways by lowering the load on roadways and railways and by using a lower emission mode. This will further help the industries interested in the utilization of the gypsum as raw material, the authorities informed.

Indian Farmers Fertilizer Cooperative (IFFCO) Ltd, a leading fertilizer firm in the country, has started the riverine jetty to explore the possibility of using waterways as a feasible mode of transport.

Pertinent to note that, the jetty was conceptualized by Orissa Stevedores Ltd (OSL), a reputed company in the fields of shipping, mining and in-plant operations, which was also given the responsibility for developing and operating the same.

On February 25 last year, OSL had entered into an MOU with Paradeep Port Authority and IFFCO for the development and operation of the jetty.

OSL has achieved this unique feat by redeveloping riverine operations in Odisha after almost a century. Currently, the jetty can accommodate vessels up to 2200 DWT. It plans to develop and expand the facilities to accommodate larger vessels, which can directly cater to neighboring countries.

“OSL believes that Odisha’s vast river network offers ample opportunities for the trade and commerce in the state which would not only help ease congestion on roads but also reduce carbon footprint, making it one of the most eco-friendly ways of transportation,” said Mahimananda Mishra, Managing Director, and Chairman OSL Group, on the august occasion.

Among others, top management authorities of the Paradeep Port, IFFCO, and OSL were also present on the occasion.

First look of ‘Avatar: The Way of Water’ to be attached with ‘Doctor Strange in the Multiverse of Madness’