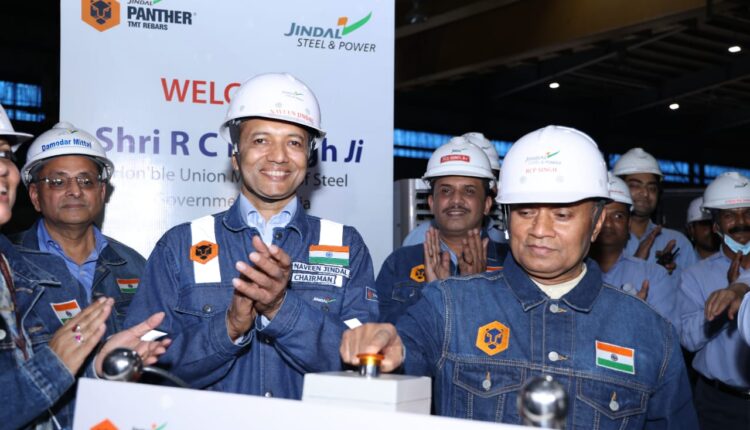 “India has become the second-largest steel producer in the world, leaving behind major economies. The maximum amount of steel has been produced from Odisha. I appreciate Naveen Jindal for building such a beautiful mega steel plant in Odisha,” said Singh.

He also appreciated JSP’s plan to expand the capacity of the steel plant to 25.2 MTPA. “By 2030, about 10 percent of India’s steel will be produced from Angul, Odisha by JSP,” he added.

The minister especially expressed his high appreciation for JSP’s effort to supply Liquid Medical Oxygen to the country during COVID-19 as its CSR initiative. The Union Minister also appreciated JSP for having more than 75 % of its employees from Odisha in Angul Plant.

The Union Minister along with a team of senior officials of the Ministry of Steel also visited the Coal Gasification Plant (CGP), the first of its kind in steelmaking. The CGP uses high ash, locally available non-coking coal to supply synthesis gas to the world’s first syngas-based DRI plant. The technology can harness the abundant coal reserve of the country and make India Atmanirbhar in meeting its coal requirement and reduce the dependence on imported coking coal.

Union Minister Singh and his team visited one of India’s largest blast furnaces, the Plate Mill producing the widest plates in India, and various other units of the mega steel complex.

“We are privileged that the Union Minister dedicated the 1.4 MTPA TMT rebar mill at our Angul steelmaking facility. It is one of the most modern and largest rebar mills in the world. In addition to producing high-quality TMT rebars of different specifications for quality infrastructure building, the Rebar Mill will generate lakhs of indirect employment”, said Naveen Jindal, Chairman, JSP. He thanked the Union and State governments and the people of Odisha for extending their support to the steel industry. Jindal particularly mentioned that the vision of the Prime minister for coal gasification technology is being translated into a big reality by JSP.

VR Sharma, Managing Director, JSP said, “JSP is a futuristic company which has the vision of producing at least half of its capacity through coal gasification which is key to green steel making for a sustainable tomorrow”.

JSP’s CEO Steel DK Saraogi thanked the union minister and his team for dedicating the Rebar Mill to the nation and for visiting the steelmaking facility.

JSP has successfully established and is operating India’s Most Modern 6 MTPA Integrated Steel Plant at Angul. It is the largest steel plant in Odisha. JSP has the vision of expanding the capacity of the Angul Steel Plant to 25.2 MTPA which will be the largest and greenest Steel Plant in the Country.

Last rites of Naba Das to be performed in Jharsuguda