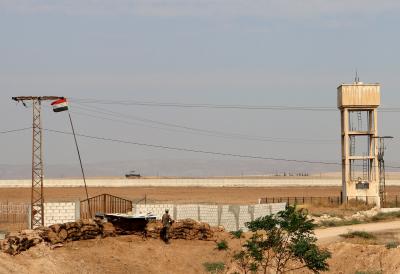 Washington: American forces have killed two top leaders of the Islamic State (IS) terror group in an airstrike conducted in northern Syria, the US Central Command (CENTCOM) said in a statement published here on Friday.

According to the CENTCOM statememt, the airstrike carried out at 6.32 p.m. on Thursday killed Abu-Hashum al-Umawi, a deputy IS leader in Syria, and another senior official of the terror group associated with him.

“Initial assessments indicate no civilians were killed or wounded during this operation. No US forces were injured or killed and there was no loss or damage to American equipment…,” the statement added.

CENTCOM commander General Michael Kurilla said that “this strike will degrade IS’ ability to destabilise the region and strike at our forces and partners”.

“Our forces remain in the region to ensure the enduring defeat of IS,” he was quoted as saying in the statement.

Thursday’s airstrike came a day after Rakkan Wahid al-Shammri, an official known to facilitate the smuggling of weapons and fighters to support IS operations, was killed in a US raid near the northern Syrian village of Qamishli.

In Wednesday’s operation, one of al-Shammri’s associates was injured, while two others were detained by US forces, the CENTCOM said in a separate statement.

The US has targeted several senior IS officials this year in Syria.

In February, the US conducted a raid in northwest Syria in which IS leader Abu Ibrahim al-Hashimi al-Qurayshi was killed after he blew himself up.

It was the largest American raid in Syria since the 2019 operation that killed the previous IS leader, Abu Bakr al-Baghdadi.

Qurayshi was named the terrorist group’s leader in November 2019 at the same time IS confirmed that Baghdadi had been killed.