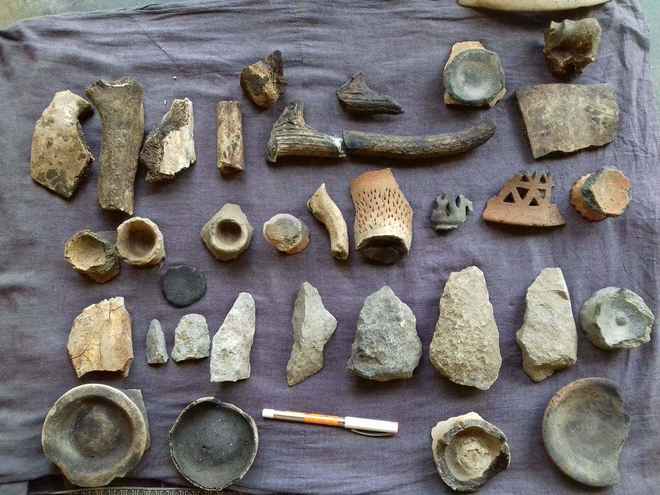 In a major breakthrough, a team of researchers of Utkal University has discovered items belonging to 4500-year-old civilisation on shores of Chilika in Odisha.

The discovery added another feather into the cap of Odisha’s leading university’s success barely few days after the varsity unearthed a rare idol of lord Buddha with seven-head snake of Copper Stone Age civilisation from Gobindapur area near Banapur in Khurda district.

The items were discovered by the student Dakhineswar Jena of Department of Ancient Indian History, Culture and Archaeology of Utkal University from Boitahuda, 2 km away from Chilika.

The team of students Kaibalya Charan Pati, Minaketan Sundar Ray, Ramakant Pradhan and Nilamani Behera, pursuing research under Assistant Professor Anam Behera had reached the spot on Sunday morning and started excavation. After digging the ground, they found raw brick, earthen pots, cups, jars, belonging to 4500-5000-year-old. As the pots were made of clay keeping those on the mat while the soil was wet, there was mat mark was found on the items. The products were assumed to be of New Stone Age.

Similarly, one-ft long deer horn and bones of goat, sheep and cows are found from a pot, which resemble the civilisation when the animals in Kashmir were placed in coffins after death and buried. The discovery revealed that the animals were coffined at that period, Behera said.

Besides, the team also found colourful earthen pots, cups, jars that indicated the items were of Copper Stone Age, which was surviving 3500 years ago. One of three skeletons discovered earlier from Harirajpur had copper shield on its chest.

Earlier, the place was the maritime hub in Odisha. People were trading with other countries on sea routes via Chilika. The maritime trade in Chilika was also mentioned in a book by Greek writer Ptolemy, experts said. Read More: 1400-year-old Buddha idol unearthed in Odisha

Medicine stores to remain closed for a day in Odisha