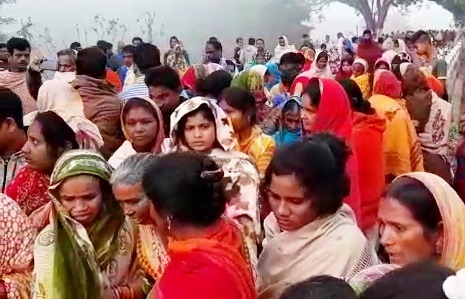 Cuttack: In a tragic incident, two women died after reportedly being run over by an unidentified vehicle near Ratapata chhak under Badamba police limits in Odisha’s Cuttack districts, today.

The deceased women have been identified as Rangabati Sahu and Tara Nayak of Ratapata village. The two were returning home after bathing in a canal this morning when the vehicle crushed them to death on the spot.

Tension ran high at the place following the road mishap as irate locals blocked Cuttack-Narasinghpur road demanding compensation for the families of the deceased. Vehicular movement was affected as many vehicles remained stranded on both sides of the road due to the blockade.

On being informed, police and district administration officials reached the spot and tried to pacify the locals. The blockade was later withdrawn after an assurance regarding release of Rs 10,000 from Red Cross Fund for the families of each deceased was given to the locals.

Police have recovered the bodies for post-mortem and started investigation.