Violence at Odisha HC: Police deployment to continue till normalcy 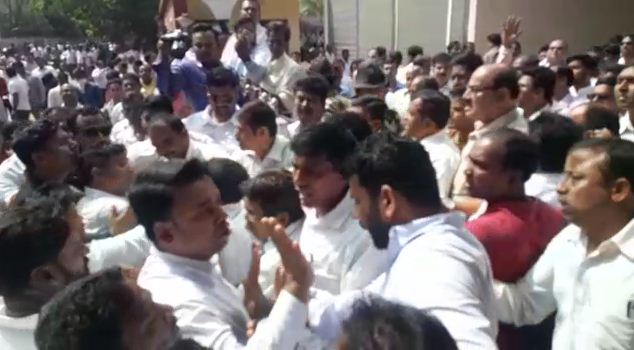 Cuttack: A day after split in Orissa High Court lawyer groups over continuation of strike followed by mild violence near the court, Twin City Police Commissioner Satyajit Mohanty today said deployment of police forces at the court will continue till restoration of normalcy.

At a press conference, Mohanty said the Registrar General of the High Court has written to the Commissionerate Police for making arrangements to provide security to the judges, court officials and litigants.

“Some lawyers had yesterday questioned the entry of police inside the court premises. I want to make it clear that during law & order situation, police have rights of doing so. Police had entered the court on three occasions– during detention of a constable by some lawyers who also allegedly thrashed him; during detention of an outsider youth and during threatening by the agitating lawyers to other lawyers who wanted to resume their work,” the police official said.

Investigation into the incident is underway and examination of CCTV footage is on. Those involved in the acts will face action, Mohanty said.

A total of two cases have been registered on the basis of complaints lodged by the constable and the youth who was hospitalised, he added.

Notably, friction between two groups of lawyers of the Orissa High Court was evident yesterday as the agitating lawyers resisted the entry of BJD Legal Front members into the court premises.

A face-off situation emerged when BJD Legal Front members were stopped by the agitators near the gate of the High Court. As many as 25 platoons of police were deployed to avoid any untoward incident.

The BJD Legal Front had withdrawn its support towards the cease-work agitation by the lawyers. The move of the front came after the Orissa High Court Bar Association declared to intensify its strike and burn effigy of Chief Minister Naveen Patnaik in front of 164 Bar Associations across the state. The members of the front were also asked to attend court proceedings.

The agitating lawyers are demanding arrest of the police personnel accused in attack on advocate Debi Prasad Patnaik.

It may be recalled that Debi Prasad Patnaik had an argument with some cops in connection with a road accident at Nuabazar in Cuttack on August 28 night following which the policemen had allegedly beaten him.

Cuttack DCP Akhileswar Singh had suspended two constables and a havildar in connection with the attack.