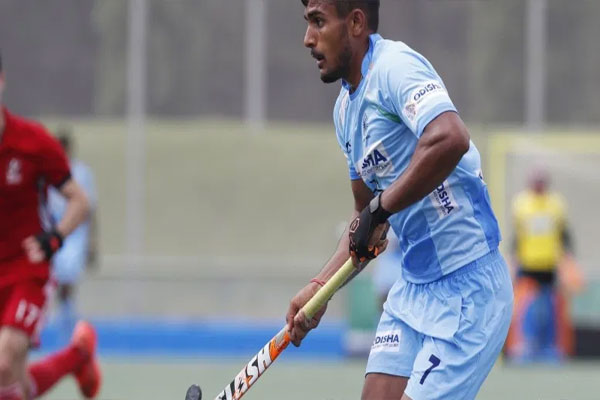 New Delhi:  Indian junior men’s hockey team defender Sanjay has taken a lot of cues from the way Harmanpreet Singh has performed as the defender and the vice-captain for the senior team in the last few years.

Sanjay, who was the vice-captain during India’s Silver medal-winning campaign at the Sultan of Johor Cup last year, has expressed that he is always amazed to see how Harmanpreet covers a lot of ground during matches and how he is always there at the right place at the right time.

“It’s always amazing to see the way Harmanpreet plays his game. He has made an immense contribution to many of India’s victories in the recent past. He shows a lot of energy during matches by covering a lot of ground and being a great bridge between the midfielders and the defenders,” said the 19-year-old.

“He has scored a lot of goals as well, which goes to show that he is not focussing only on the defense side of things,” he added.

Sanjay, who has played 31 matches for the junior team since October 2017, also said that he couldn’t have asked for a better start to his junior international career.

“All of us judge our performances on the basis of how we play in big tournaments and I have been very fortunate to contribute to the Indian junior team’s success in the last few years. The Sultan of Johor Cup 2017 was the first junior international tournament that I played and we won a bronze medal there. And then we went on to clinch silver at the 3rd Youth Olympic Games 2018. So, it’s been a great start to my junior international career and I hope I get to play many more matches in the future,” said the defender.

While speaking about his biggest dreams, Sanjay firmly mentioned that his only goal at the moment is to find a place in the Indian senior team.

“I have been pretty happy with the way things have gone for me at the junior level, but I certainly want to take my game to the next level and hopefully one day I will make the transition to the Indian senior team. It’s the ultimate goal for any aspiring hockey player and I am no different.

“I have learned how to play in pressure situations and I thoroughly enjoyed being part of the leadership group during the Sultan of Johor Cup last year. I am certainly going to hone my skills further and be absolutely ready when the big opportunity of playing for my country comes my way,” said Sanjay.