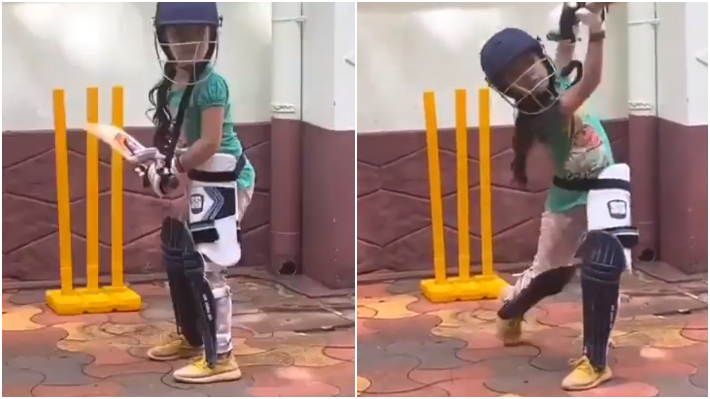 New Delhi: A six-year-old girl, Mehak Fathima, from Kozhikode in Kerala has caught the attention of India women’s Test team captain Mithali Raj and industrialist Anand Mahindra after she posted a video of her batting practice in full cricketing gear on Instagram recently.

Mehak, a Class 1 student, asked her father Muneer — who played for University of Calicut — to teach her the nuances of the games eight months ago when she saw him coaching her three-year-old brother, Mohamed.

Mehak approached her father with the question if he wasn’t teaching her because she was a girl.

“Earlier, Mehak was not interested in sports, but when she saw Muneer teaching her brother, she went up to him and asked if he wasn’t teaching her because she was a girl. Muneer was quite shocked by her question and then realised she was also interested in learning to play cricket,” Yousuf, Mehak’s uncle, told The Better India.

In June, her videos were shared widely, where Mehak is seen executing some copybook cricketing strokes. The video has since gone viral, with India Test skipper Mithali Raj taking note.

“She has both my support and blessings. All little girls keen to pursue the sport always have my blessings. Her parents can DM me regarding any assistance they need,” said Mithali, who is currently leading the Indian team to England for a one-off Test.

I keep getting forwards about kids around the globe being prodigies in soccer or basketball. Ok world, here’s our future superstar. @KirenRijiju let’s keep an eye on this young lady & not let her talent be wasted… https://t.co/3aSxDqOMmh

“I keep getting forwards about kids around the globe being prodigies in soccer or basketball. Ok world, here’s our future superstar. @KirenRijiju (Union sports minister) let’s keep an eye on this young lady & not let her talent be wasted…,” Mahindra tweeted on June 12.

“I created an Instagram account and posted videos of my kids playing to give them more exposure. I never imagined that something like this would happen. There are quite a lot of talented people who often go unrecognised. This opportunity is so exciting for us and we are extremely happy that she is being recognised like this,” Muneer said, adding, “We even got calls from Biju George, who trained cricketers like Sanju Samson, offering to help us with Mehak’s training.”