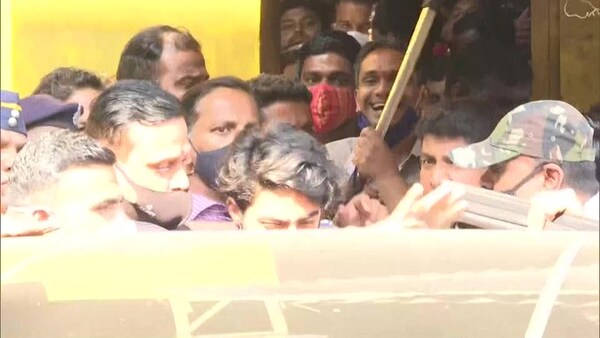 With thousands of fans, admirers, a huge posse of police and mediapersons camping here for the second day, Aryan’s much-anticipated exit out of the ARCJ to the waiting vehicle lasted barely a couple of seconds.

All that the waiting crowds managed to catch was a glimpse of Aryan sporting a bright blue shirt with his stark mane visible, but his face covered by a dark mask as he stepped inside the car without looking around.

Whisked off by a bevy of bouncers and bodyguards to the white SUV with dark glasses on all sides, Aryan was immediately driven toward his Bandra home via the Bandra-Worli Sea Link.

He reached well in time for a piping-hot home-cooked lunch, 29 days after he left his ‘Mannat’ bungalow on October 2 for the Mumbai-Goa luxury cruise which ended in an unexpected jail sojourn.