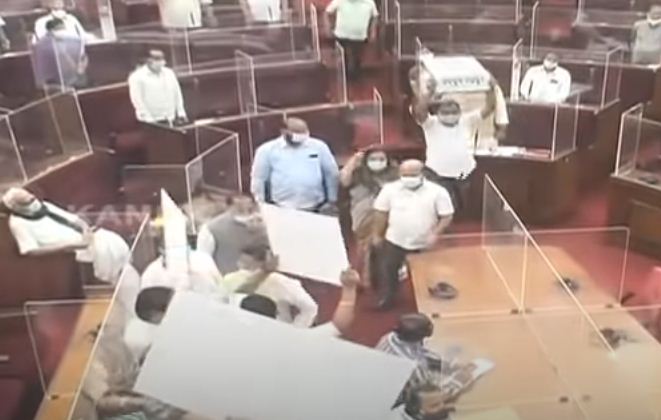 Bhubaneswar: Logjam continued to prevail in the Odisha Assembly for the sixth consecutive day as both the opposition and ruling party members created a ruckus in the House leading to adjournment of proceedings till 4 p.m.

As soon as the House assembled for the day at 10.30 a.m., opposition BJP and Congress members rushed to the well holding placards and banners. They shouted slogans reiterating their demand for removal of the Minister of State (MoS) for Home, Dibya Shankar Mishra over Mamita Meher murder case.

Wearing black ‘gamucha’, BJP members beat gongs and bells as a mark of protest. The Congress legislators showed placards demanding removal of Mishra from the council of ministers.

To counter the opposition, women members of the treasury bench sprinkled ‘ganga jal’ on the protesting opposition members in the well of the House. Speaker S.N. Patro adjourned the House till 4 p.m.

Congress had brought adjournment motion notice in the Assembly on Tuesday for a discussion over the sensational Mamita murder case to which Parliamentary Affairs Minister, Bikram Keshari Arukha was supposed to reply.

Following the adjournment, members of all three parties — BJP, Congress and the BJD continued such protests outside the Assembly hall and inside the premises.

The BJP MLAs were seen performing ‘puja’ to Lord Jagannath while the Congress members staged a protest holding placards. The ruling BJD legislators were seen holding banners and staged a ‘dharna’ before the Mahatma Gandhi statue.

“Naveen Patnaik is in deep slumber like ‘Kumbhkaran’. The number of ‘Dhritarashtra’ and ‘Duryodhans’ in Odisha is rising. The Chief Minister has turned deaf ears to all that is happening around him, that’s why we are beating gongs to wake him up,” BJP Deputy leader in Assembly, Bishu Sethi told media outside the House.

“The same person (Naveen Patnaik) had sacked several ministers in the past for small mistakes. What happened today?” he asked.

Alleging the Chief Minister is not giving priority to the Assembly, Sethi said, “He (Naveen) is going to give the hockey trophy in this way, but is not attending the Vidhan Sabha.”

Senior Congress member Tara Prasad Bahinipati, who had sprinkled ‘ganga jal’ and cow urine inside the Assembly hall on December 4, in a bid to ‘purify’ it, alleged that the ruling BJD was creating uproar in the House.

“It is the responsibility of the Chief Minister, who is leader of the House, to ensure smooth functioning of the Assembly. However, it is shameful that the ruling party members are disturbing the House, Bahinipati said.

On the other hand, BJD lawmaker P.K. Deb alleged that the opposition parties are doing drama for their political gains eying upcoming panchayat and urban civic polls.

“On one hand you (opposition) are giving adjournment motion and on the other, you are not ready to discuss the issue. We condemn such acts of opposition members,” Deb said.

People have elected the members to the Assembly to discuss several issues, including price hike, fertiliser shortage and farmers facing problems due to recent heavy rainfall. However, opposition members don’t want the House to run and discuss these issues, he added.

“That’s why we have sprinkled ‘ganga jal’ on the opposition members praying that good sense prevails among them,” the BJD leader said.

The Odisha Assembly has been witnessing uproar since the beginning of the winter session on December 1 over the female teacher Mamita Meher murder case.

Even though the Chief Minister had assured the House that his government is committed to bring justice to the victim, the opposition continued their protests demanding removal of the sitting BJD Minister.

1 in 3 fully vaccinated people with sore throat,runny nose may be Covid infected: Study