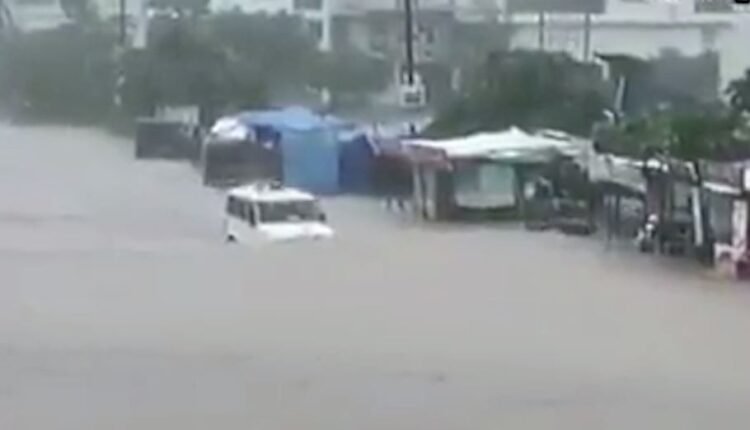 Mumbai: As torrential rains claimed at least three lives in two days in and around Gujarat’s Rajkot city, an SUV of the local police was seen virtually slicing through the flooded roads, rendering assistance to the marooned folks.

A video of the Mahindra Bolero SUV of the Rajkot police was posted by a local and captioned – “Mahindra Hai To Mumkin Hai” – a sly take-off on the Bharatiya Janata Party’s oft-repeated slogan to praise Prime Minister Narendra Modi.

The white police SUV can be seen gliding through the flood waters on the stretch of road near the Speedwell Party Plot in a prime area of the city – which has given the state two Chief Ministers, including Prime Minister Narendra Modi, who won a by-election in 2002, and the recently resigned Vijay Rupani, who is a sitting legislator from Rajkot West. Former Minister and Karnataka Governor Vajubhai R. Vala had also been legislator from the state.

With most other vehicles forced off the roads by the downpour, the high-speed performance of the Bolero in at least 3-4 feet deep flood waters earned laurels while the Rajkot Municipal Corporation was mercilessly roasted on social media.

“Seriously? During the recent rains? Even I am pretty amazed”, he said in a tweet.

One citizen whip-lashed the Rajkot civic body: “Happy for Mahindra but what a sad state of affairs.. clearly civic bodies have done nothing.”

Another chipped in saying while the video was certainly a great ad for the Bolero vehicles, he wanted more action than the Bolero.

“Whats’s the point in police moving around in a jeep in flood waters? Would have been heartening to see civil aid boats, 5-tonners, small rafts, etc., distributing rations, medical supplies, helping people move around, etc”, rued the disappointed twitteratti.

Another was all patriotic praise for the Mahindra Bolero with a whack for the BJP: “Happy to see the powerful SUV from our own country but at the same time #shame4bjp having the condition like this”.

Another was cautionary, urging people not to share such videos or “Mahindra would increase the prices of its vehicles”, and another shot back: “So to promote Mahindra, officials not caring to clear the drainage..”

In his post a worried citizen saluted the SUV, but pointed out the problems of population, pollution, education, and nature, and urged Mahindra & Mahindra chief to tweet on these issues.

And there were many who rambled on the qualities of the rugged Bolero which drove away the Ford from India, and many proclaimed their unabashed love for the different versions of Mahindra vehicles they proudly own.