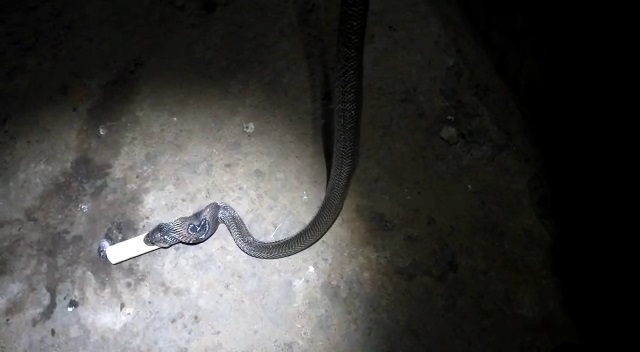 Sunabeda: In a bizarre incident, a snake reportedly gulped down a PVC pipe and subsequently vomited it inside a house in Sunabeda area in Koraput district.

The entire event was captured in a video that showed a cobra in great distress is vomiting an eight inch-long and one inch-width PVC pipe during its rescue operation in a house.

The incident was reported from Janiguda area under Sunabeda Municipality in Koraput district where about a 4-ft-long cobra had entered into a house of one Krishna Dora yesterday night.

“I received a call from owner of the house at around 8.30 pm last night seeking assistance to rescue a snake that had entered his house. I found that a snake with distended abdomen (abnormally swollen outward) near a bicycle. When I tried to rescue it from that place, it moved and started vomiting the piece of PVC pipe that it had swallowed assuming it to be food,” said Sujit Mohanty, the snake helpline member.

The condition of the snake was stated to be normal after it vomited the plastic pipe. Later, the snake helpline member released the cobra into the wild.