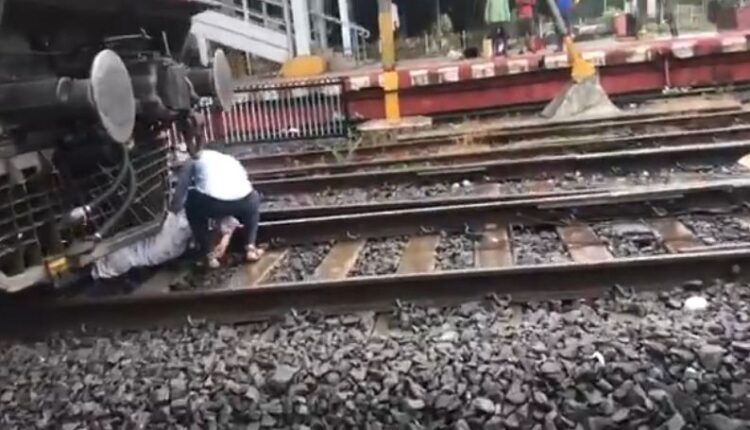 Thane: Displaying quick presence of mind, the loco pilots of a Mumbai-Varanasi train on Sunday immediately applied emergency brakes to save the life of a senior citizen who fell while crossing the railway tracks near Maharashtra’s Kalyan station, Central Railway (CR) officials said.

The incident occurred around 1 p.m. when the senior citizen was crossing the rail tracks, apparently unaware of the train which had started from Kalyan station rolling towards him.

While the slow-moving train ground to a halt, the elderly person had already come under the locomotive as many people screamed and rushed down on the tracks to help him.

The loco pilots and rail staffers assisted the stunned bespectacled man slowly coming out from under the locomotive, reassuring him repeatedly that he was safe, and calming him as he crawled out of what could have been certain death.

He was helped on his feet and apparently unhurt, taken a few feet away to rest, even as the railway officials gently counselled him to refrain from such acts, though it was not immediately clear how or why he happened to be on the railway tracks.

“Uncle, you have escaped the jaws of death. Seeing you there, we were terrified… Please don’t walk on tracks like this,” one of the officials was heard saying.

Soon afterwards, the CR authorities issued another appeal to the people not to trespass on railway tracks since it can prove to be fatal, as the city limped back to normalcy after heavy overnight rains wreaked havoc.