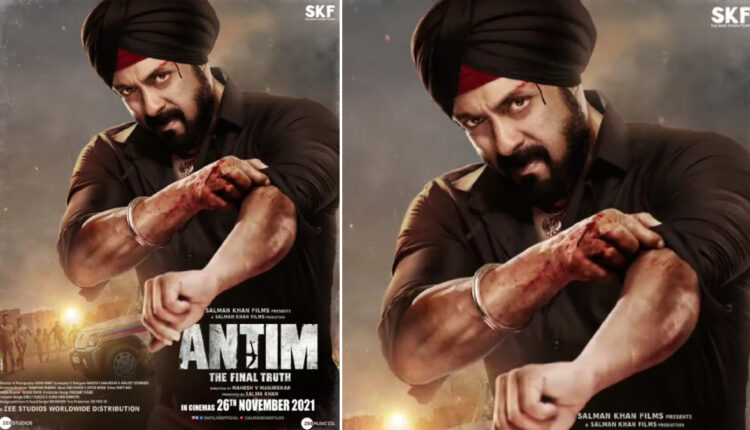 Mumbai: The excitement over the Salman Khan and Aayush Sharma-starrer ‘Antim: The Final Truth’ is reaching new levels with each passing day. The audience, who are eagerly waiting for the film, were in for a sweet surprise as Salman Khan released a new motion poster of himself.

Salman took to Instagram to share the pulsating poster from the film which features him in an all black avtar. Salman, who plays a Sikh cop in the film, can be seen wearing a black shirt and a black turban and is rolling up his sleeves.

His character in the film is named ‘Rajveer’ and by the look of it, he is in for serious business in the film with his vengeful side on display as he mouths the lines, “Jis din ae Sardar di hategi, sab di fategi” (the day this Sardar loses his cool, everyone will run for cover) backed by a powerful background score.

Salman captioned the motion poster, “Enjoy #Antim releasing on November 26 in theatres near you… #SalmanAsRajveer.”

The motion poster also announces the release date of the trailer as October 25.

Earlier, the makers had released a menacing poster of Aayush Sharma as ‘Rahuliya Bhai’ from the film which features him in a raw and grungy avtar. And this motion poster featuring Salman Khan is enough to break the internet.

‘Antim’ is a story about the deadly struggle between a gangster played by Aayush who looks to expand and rule over his territory without anyone’s intervention until a cop essayed by Salman gets in the former’s way. Salman’s character of Rajveer is determined to put an end to gangster’s rise and rule, and for that he can go to any lengths.

The film is set to hit the theatres worldwide on November 26, 2021.