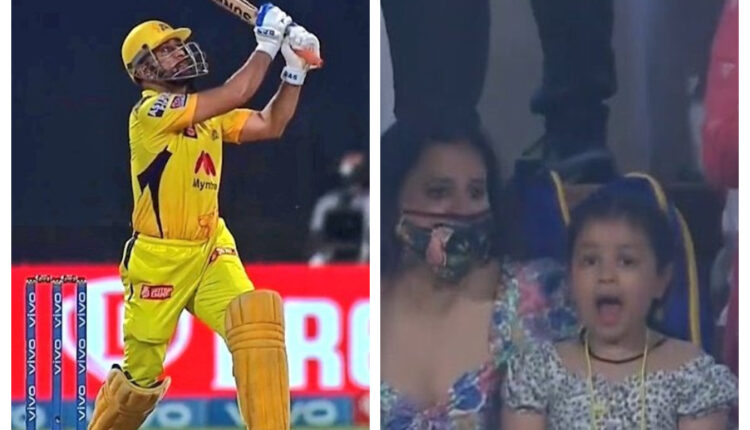 Sharjah: Three-time champions Chennai Super Kings became the first team to qualify for the playoffs of the IPL 2021 with a six-wicket win over Sunrisers Hyderabad in Match 44 of the tournament at Sharjah Cricket Stadium here on Thursday.

Chasing 135, Chennai reached the target with two balls to spare. With 18 points from eleven matches, Chennai retained their top position in the points table while Hyderabad are now eliminated from the tournament.

CSK captain MS Dhoni finished off the chase with a huge six deep mid-wicket off Kaul in the final over to seal a playoff spot for his team.

As Dhoni hit the ball out of the park, the cameras panned to his daughter Ziva who was caught cheering enthusiastically for her father’s team.

Dhoni finishes of in style! A magnificent six into the crowd. #Dhoni #CSKvsSRH #Playoffs @ChennaiIPL pic.twitter.com/GjFRC0o48x

Earlier, inserted into batting first, Hyderabad lost their first wicket as Jason Roy bottom edged a cross-seamer from Josh Hazlewood to Dhoni in the fourth over. After finishing power-play stage at 41/1 in six overs, Dwayne Bravo’s full ball went past Kane Williamson’s flick and trapped him lbw. Saha had luck on his side when he cut straight to backward point off Shardul Thakur in the ninth over, but replays showed the bowler had overstepped.

Bravo came back in the eleventh over to take his second wicket of the match as Priyam Garg top-edged a short ball to Dhoni moving to his left. In the next over, Saha decided to break the shackles with a pull, which he top-edged to Dhoni off Ravindra Jadeja.

Abdul Samad and Abhishek Sharma took 21 runs from 14th and 15th overs to infuse life into Hyderabad’s innings. While Sharma hit Thakur for a brace of boundaries, Samad hit Hazlewood for a down the ground six. Sharma lofted Hazlewood over extra cover in the 17th over. On the next ball, Hazlewood had his man as Sharma mistimed the loft to long-on. Hazlewood had his second wicket in three balls as Samad slashed to point.

Jason Holder tried to go big but holed out to deep extra cover off Thakur. A few lusty blows from Rashid Khan ensured that Hyderabad crossed the 130-mark which was insufficient to prevent a loss.