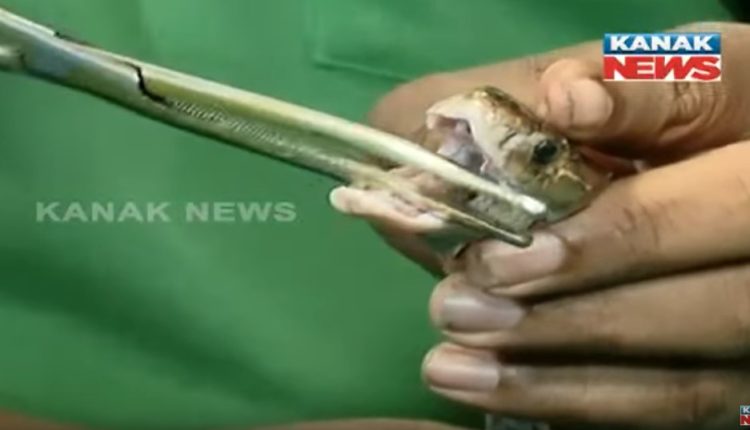 Bhubaneswar: A team of veterinarians successfully operated to remove a fishhook stuck inside mouth of a venomous snake here in the state capital.

The cobra de capello snake was brought to the College of Veterinary Science & Animal Husbandry of OUAT by snake helpline members in a critical condition from Jaleswar area in Balasore district yesterday.

The veterinary doctors were shocked to see the presence of a long fishhook with a thread inside the snake the x-ray report.

Later, a team of doctors performed surgery on the snake to remove the foreign body from its mouth. The surgery took about 30 minutes.

“In x-ray report, we found that the fishhook was stuck in its esophagus area, around 4 inch deep from its mouth. We tried to remove it manually, but it was not possible. Then, we performed surgery to remove the fishhook after administering a mild dose of anesthesia,” said a vet, who was part of the team.

“The surgery in esophagus area was successful,” he said adding that the snake will undergo a normal routine care.

After that, the snake will be put on liquid diet for some days. The wound will be healed within seven to ten days. Later, it will be released into a natural habitat, he told media.

According to reports, the cobra de capello was spotted by locals in Jaleswar area in a pond yesterday. It was rescued by the snake helpline members from the water.

The snake was suffering from pain in water without food in past four days due to the fishhook. As we cannot remove it, so we rushed it to the OUAT for surgery. The position of the fishhook stuck inside its mouth was detected in the x-ray. Finally, the fishhook was removed by the vets before it could cause more injuries to the reptile. We will make arrangement to release the snake in the area from where it was rescued, said the snake helpline member.

More labs in Odisha likely to get permission for COVID-19…