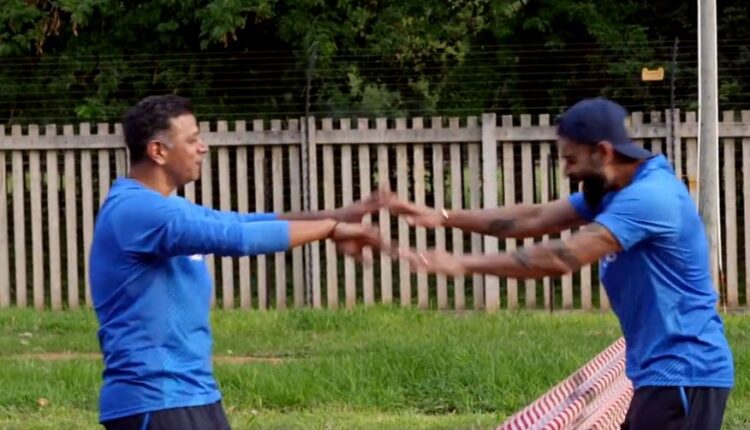 Centurion: The Indian cricket team had its first full training session here in nearly a week as captain Virat Kohli, head coach Rahul Dravid and other players engaged in a session of footvolley.

India will take on hosts South Africa in a three-Test series beginning here on December 26 (Boxing Day), hoping to clinch their maiden series win in the longest format of the game here. But with no warm-up game slotted due to the tight schedule, the team will have to quickly adapt to the pitches and also acclimatise to the altitude. The venue is at a height if 1400 metres.

On Sunday, the Board of Control for Cricket in India (BCCI) posted a video of Team India playing footvolley during their training session.

How did #TeamIndia recharge their batteries ahead of their first training session in Jo'Burg? 🤔

The team had a warm-up session where they did a bit of jogging and stretching before getting down to business. Kohli was seen receiving batting tips from Dravid, with pacer Jasprit Bumrah — returning to play Test cricket after being rested for the two-Test series against New Zealand — going full tilt at the nets.

Mohd Shami, Ashwin and veteran pacer Ishant Sharma too bowled at the nets, with the skipper finally leaving the ground after the session, giving a thumbs up to the players as he hastily made his way out with a huge kit bag lugged on his back.

Posting the video, the Indian cricket board tweeted, “Getting Test-match ready. Snippets from #TeamIndia’s first practice session ahead of the first #SAvIND Test.”

On Saturday, the BCCI had posted a video of the players going for a light workout, which included a game of foot volley.

India’s strength and conditioning coach, Soham Desai, had emphasised that after three days of hard quarantine in Mumbai, starting a skill session right away would have been “high risk”, which is why the team had an easy session on Friday evening.