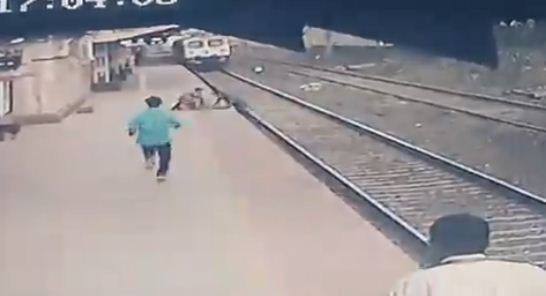 Thane: Displaying rare courage and presence of mind, a Central Railway employee raced an oncoming suburban train to save the life of a kid who fell on the railway track, here on Monday morning, officials said.

Very proud of Mayur Shelke, Railwayman from the Vangani Railway Station in Mumbai who has done an exceptionally courageous act, risked his own life & saved a child’s life. pic.twitter.com/0lsHkt4v7M

The incident happened at Vangani Station of Central Railway in Thane and the Pointsman Mayur Shelke’s feat earned him an appreciative tweet from Railway Minister Piyush Goyal.

As per CCTV footage, a woman is seen carrying a heavy rucksack walking on the platform when the child suddenly seems to stumble and fell onto the railway tracks below.

The footage also shows a local train speeding on the same direction when the Pointsman Shelke is seen running on that track from the opposite direction.

As the train speed headlong before him, he seemed to falter momentarily, but continued to sprint and help up the child who was trying to clamber on the high platform.

Shelke pushed the child up and also desperately flung himself as barely a second late the train zoomed on to the platform, but both the kid and Shelke were saved by virtually by a hair’s breadth.

“Very proud of Mayur Shelke, Railwayman from the Vangani Railway Station who has done an exceptionally courageous act, risked his own life & saved a child’s life,” said Goyal in a tweet.

Further details of the woman and child, how they happened to be on the platform during the lockdown norms, etc, are awaited, but Shelke’s feat has made him a darling of social media.