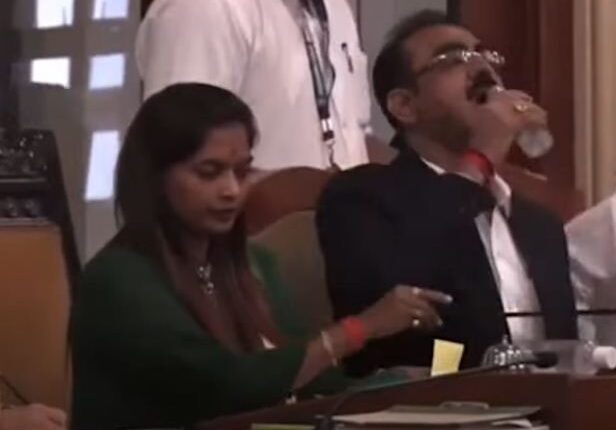 Mumbai: An officer of the BrihanMumbai Municipal Corporation (BMC) mistakenly drank hand sanitizer instead of water, here on Wednesday.

In a video of the incident which has gone viral, Pawar apparently picked up a bottle of a clear liquid lying before him, opened it and took a swig, but suddenly appeared to choke on it.

As his colleagues wondered and enquired what was wrong, and an aide rushed to his help, Pawar jumped up from his chair, rushed to a nearby washroom to clear his mouth and returned after some time.

It later transpired that instead of a bottle of water, he had taken a mouthful of hand sanitizer, but fortunately realized the error before gulping it down.

Later, he was handed a bottle of water from which he took a gulp before presenting the budget in the BMC House.

It may be recalled that last Sunday (January 31), in a serious lapse, 12 minor kids were administered oral drops of hand sanitizer instead of the polio vaccine dose in a government primary health centre in Yavatmal district.

All the children — aged between 1-5 — were discharged from hospital after three days of treatment but the government took a grim view of the incident and suspended at least three nurses and other officials for negligence of duty.