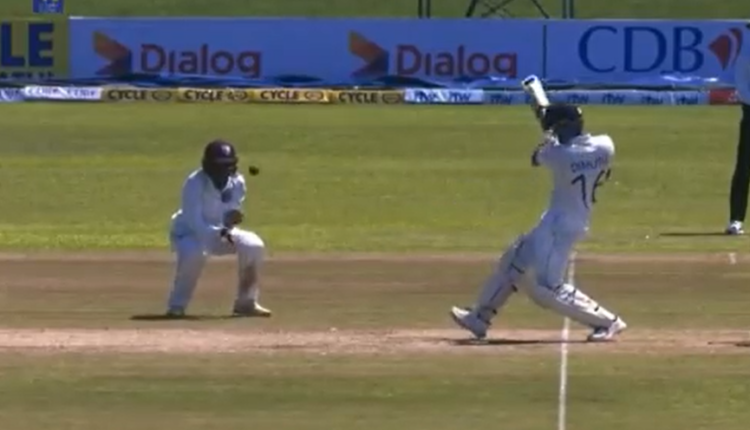 Galle: West Indies debutant Jeremy Solozano had to be taken to hospital after being hit on the head while fielding at forward short leg in the first Test against Sri Lanka at Galle. Such was the impact of the blow that Solozano had to be stretchered off the field.

The unfortunate incident happened on the fourth ball of the 24th over during the first session on day one of the Test at Galle Stadium.

Roston Chase bowled a short delivery to Sri Lankan captain Dimuth Karunaratne. In response, Karunaratne struck a powerful pull shot off the back-foot straight in the direction of Solozano, who got very little time to duck.

The 26-year-old was smashed in front of his helmet grille with the rear part of the helmet coming off on impact.

Solozano lay still on the ground, surrounded by the players while the physio tended to him. In the dressing room, West Indies coach Phil Simmons looked a worried man. Solozano was consequently stretchered off the field by the medical staff and was taken to a hospital in an ambulance.

“Injury Update. Debutant Jeremy Solozano was stretchered off the field after receiving a blow to his helmet while fielding. He has been taken to the hospital for scans. We are hoping for a speedy recovery. We’ll update you once we hear more. Shai Hope is the substitute fielder at this time,” tweeted Windies Cricket.