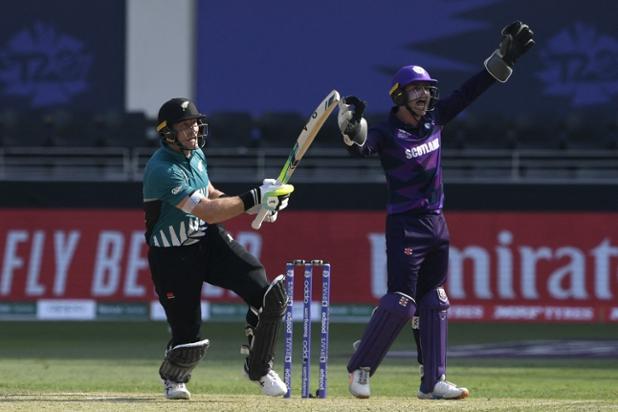 Dubai: There was a witty moment during the New Zealand vs Scotland match in the ICC Men’s T20 World Cup at the Dubai International Stadium on Wednesday. When New Zealand were batting, Scotland wicketkeeper Matthew Cross was heard motivating leg-spinner Chris Greaves, saying that the whole of India was behind him to do well with the ball.

“Come on Greavo. Whole of India is behind you here, Greavo,” said Cross in the middle of the eighth over when Glenn Phillips was on strike and trying to take the guard with Martin Guptill at non-striker’s end. His line was picked up by the stump microphone and consequently, the clipping went viral on social media.

After India lost their first two matches in Group 2 of Super 12 stage against Pakistan and New Zealand, their hopes of qualifying for the semi-finals became dire. In order for the 2007 champions to qualify, they now need to win their remaining matches by a huge margin. They also have to depend on New Zealand losing at least two of their remaining games.

But New Zealand won the match by 16 runs against Scotland, thanks to Martin Guptill’s knock of 93, propelling the Black Caps to 172/5 in 20 overs. In reply, Scotland posted 156/5 in 20 overs but fell short of the target.