Bhubaneswar:  At a time when Utkal University here is gearing up to celebrate its Platinum Jubilee from tomorrow, an unexpected tension prevailed on the campus after a youth climbed atop a building of the institute and threatened to commit suicide giving a headache to the varsity authorities as well the rescue team.

The youth identified as Subodh Barik of Praharajpur village under Pattamundai block in Kendrapara district was rescued by Fire Services personnel after a four-hour-long operation.

Sources said the youth climbed atop Parija Library building at around 9 AM.  On receiving information, around 50 fire officials reached  the spot and made all possible efforts to rescue the youth safely with the help of two sky lifts. Besides, a drone camera was also used to keep a track on the movement of the youth. The officials first tried to convince him to help them in the rescue operation, but in vain. Instead, the youth threatened them that he would jump off the building if anybody comes near him. Moreover, the youth refused to accept food offered by the rescue officials from the sky lift. 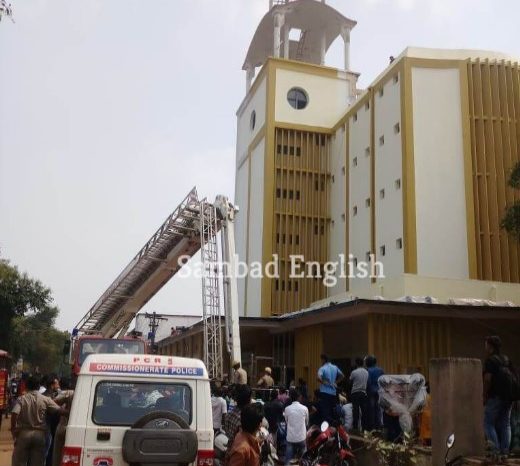 “One sky lift was engaged to divert his attention while another was used to rescue him. A drone camera was also used to keep an eye on his activities. Besides, a psychiatrist was there on the sky lift for counseling,” said an official of the varsity.

After toiling for over four hours, the  fire personnel managed to reach near the youth on pretext of having a conversation with him and later dragged him into sky lift. Barik was later taken to a hospital here for medical examination.

Barik’s father said, “He was under pressure after being sacked from job in India Post. He was missing since last one month and a case was registered at Nayapalli police station in this connection. A few days ago, some people had rescued him and handed over to an NGO named Mission Ashra, from where he had escaped  two days ago.”