When fear of losing to hunger defeated fear of coronavirus 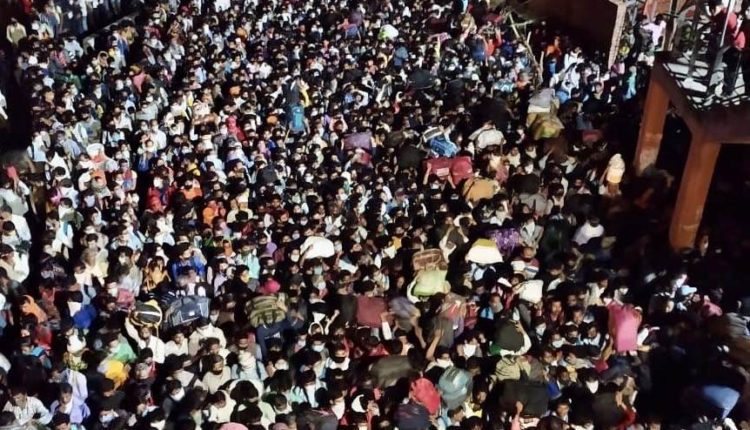 New Delhi: Despite Prime Minister Narendra Modi’s call for a nationwide lockdown in a battle against deadly coronavirus, a sea of migrant workers reached Anand Vihar Interstate Bus Terminal hoping to reach back to their hometowns.

Many of these workers had travelled on foot for several kilometers after the transportation throughout the capital city was discontinued owing to the lockdown.

On being asked if the workers feared about the spread of COVID-19 and if being in crowd could make them vulnerable to the virus, most of them claimed corona was the least they feared.

“What corona? My children are hungry, they have walked from Gurugram with me do you think corona is what I fear?,” Yogesh Gangwar who is salesman in a cloth showroom said as he wiped his tears.

Many others regret for not leaving the city early on.

“God knows when we will reach our hometown. My family was telling me to leave work early in March and get back, but I avoided suggestions and now I am stranded here,” Babu Ram who hails from Rampur and works at a plastic recycling factory here in Mundka told IANS.

Migrant labourers were forced to walk as the public transport were closed and borders were sealed due to the lockdown.

“There is no food to eat, I cannot pay rent of room without my daily wages so I decided to walk with my family from Narela to here. I just hope I get a bus soon,” Revati, who works as construction labour said as she fed her three-year-old with pieces of bread that one of the policemen at Anand Vihar gave her.

However, when Yogi Adityanath-led BJP government in Uttar Pradesh decided to deploy around 1,000 buses to help these workers reach their respective hometowns, thousands of them reached Anand Vihar ISBT with a hope to catch one of these buses.

The Delhi government also announced that 100 buses have been deployed to help those trying to reach to their homes in other states on foot.

Earlier, budget passenger carrier SpiceJet had offered its aircraft to operate few flights from Delhi and Mumbai to Patna to take migrant labourers, particularly from Bihar, who have got stuck in various parts of the country due to COVID-19 related lockdown.

Medicos in Odisha to be trained to manage COVID-19 situation