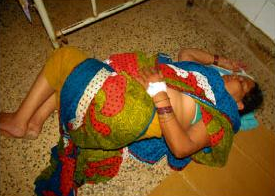 A woman was left critically injured after she was allegedly subjected to third-degree torture at the Saranakula police station in Odisha’s Nayagarh district on Thursday. The district superintendent of police have ordered a probe into the incident.

The woman was identified as Sita Jena (55), wife of Bhikari Jena of Sikharpur Godisahi under Saranakula police station.

According to reports, Prabhati Jena was married to Upendra, son of Bhikari Jena. Due to some family dispute, Prabhati wanted to give divorce to Upendra, and for that, she has even filled a complaint against him at the nearest police station.

Yesterday, the sub-inspector of Saranakula police station Bidita Jena called Upendra’s father Bhikari and mother Sita to the police station for interrogation. When Jena asked them to convince their son to give divorce to Prabhati, Sita interfered her by saying, they will discuss the case in the court. But at the police station, Bidita started beating Sita in a fit of rage following which Sita fell unconscious. Bhikari admitted her to the Nayagarh district headquarters hospital. Her condition was stated to be critical, sources said.

The woman’s husband has complained to the Nayagarh SP who in turn directed the A.S.P to investigate further.