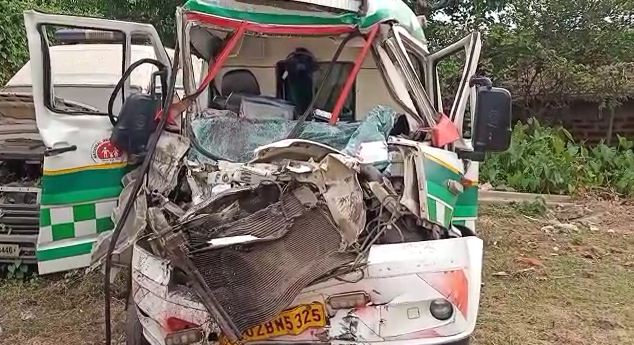 Jajpur: In a tragic incident, three persons, including a woman patient, died as an ambulance carrying them hit a truck on NH-16 near Badachana in Odisha’s Jajpur district, late last night.

The deceased have been identified as patient Gitanjali Pradhan of Bhogarai area in Balasore district, ambulance driver Bhaskar Sahoo and pharmacist Hemant Kumar Badi. Gitanjali’s husband Shiva Shankar Pradhan, who was present inside the ambulance, and helper Pradip Kumar Nayak sustained critical injuries in the accident and were admitted to the SCB Medical College and Hospital in Cuttack for treatment.

According to reports, the ill-fated ambulance was carrying the persons from Balasore District Headquarters Hospital to SCB Medical College and Hospital. It rammed into a truck from rear as the driver of the truck lost control over the wheels after one of the tyres burst.

While the three died on the spot under the impact of the collision, Fire Services personnel, on being informed about the mishap, rushed to the place and rescued the injured ones from the mangled ambulance using cutter machines.

Weekly Horoscope May 2 to 8, 2022; Astrological Prediction for Zodiac Signs