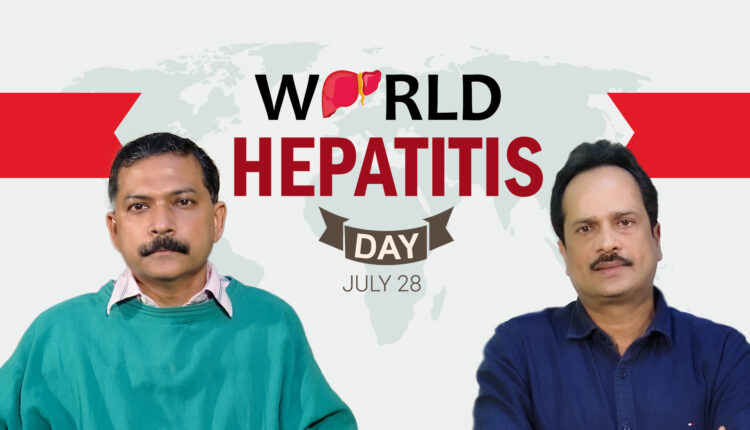 Bhubaneswar: World Hepatitis Day is an opportunity to step up national and international efforts on hepatitis, encourage actions and engagement by individuals, partners and the public and highlight the need for a greater global response as outlined by World Heath Organization.

The date of 28 July was chosen because it is the birthday of Nobel-prize winning scientist Dr Baruch Blumberg, who discovered hepatitis B virus (HBV) and developed a diagnostic test and vaccine for the virus.

To know more about Hepatitis Swasthya Sambad had exclusive conversations with two of the most renowned Hepatologists and Gastroenterologists of the state. This is what they had to say:

As far as India is concerned, Hepatitis B and C have a prevalence of 3% to 5%; Hepatitis C has 1%. Earlier, the prevalence rate was high but with every passing year, the rate is decreasing. India witnesses more than 1 lakh deaths due to Hepatitis every year.

Hepatitis is completely avoidable and curable. To spread more awareness about this disease, every year World Health Organization (WHO) observes Hepatitis Day on July 28. The primary mission and purpose of observing this day is to spread awareness and eradicate Hepatitis from the face of the planet by 2030.

The theme for this year’s Hepatitis Day is ‘Bringing Hepatitis Care Closer To You’.”

“Generally when we talk about Hepatitis, we emphasize more on Hepatitis B and C. However, Hepatitis A and E is also a major matter of concern. This deals with Fecal-Oral transmission which means, it is caused due to contaminated water and food. This is one of the most common reasons behind death due to Hepatitis. Generally, pregnant women are more prone to this virus especially during rainy season.

As far as Hepatitis B and C is concerned, you will be shocked to know that this virus has no symptoms during initial stage. By the time one gets symptoms, the virus would have already had an advanced impact on the liver. This is one of the main reasons behind liver cirrhosis. This is why we recommend everyone to go through a routine test for Hepatitis B and C.

Hepatitis is also a Sexually Transmitted Disease (STD). This virus is extremely prone for the people who indulge with multiple sexual partners or do not have safe sex. Basically this form of Hepatitis can be transmitted through blood, syringe or sexual transmission.

However, this is absolutely curable. Ten years back there was no advanced medicine. But, there are medicines that can be prescribed in today’s day and age which can completely cure an individual within a period of six months.

What we need to understand is “Prevention is better than cure”. It is important for every individual to go for a Hepatitis test in order to detect at early or initial stage.”