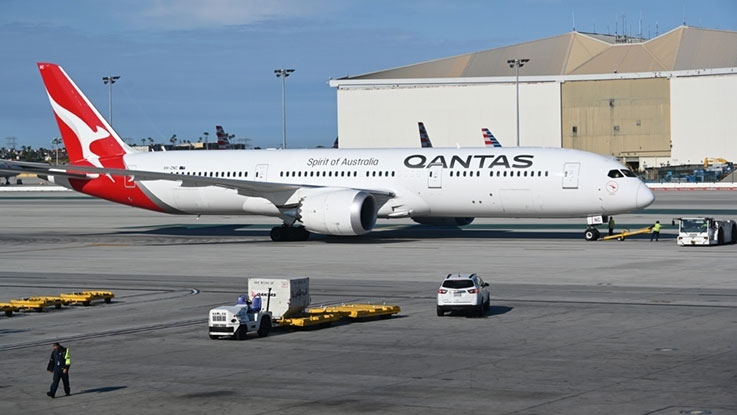 Sydney: A non-stop Qantas New York to Sydney flight, deemed as the world’s longest with nearly 20 hours in the air without layovers, is set to take off on Friday.

The flight, which is scheduled to depart New York at 9 p.m. from the American megalopolis, is the first of three planned test flights involving the new Boeing 757-9s aircraft which are set to cover new direct routes between Sydney and, London and New York, reports Efe news.

The flight is expected to last some 19 hours-and-a-half, covering a distance of about 17,000 km.

Qantas Group CEO Alan Joyce said that the airline was “excited to be taking existing research strategies to the next level by conducting interactive onboard research using rigorous scientific protocols”.

The planes will become mobile research labs, where six volunteer passengers – out of a total of 50, including crew members – will be subjected to experiments seeking to better understand ways to reduce the impact of jet lag.

The volunteers are expected to follow a rigorous plan to modulate their sleep, food and drink intake and physical movements.

“Usually with night flights, passengers are provided with dinner shortly after take-off and then lights are turned off. But this may not necessarily be the best way to help reset a passenger’s body clock to the destination time zone,” Joyce explained.

The study, which is the first of its kind in the world, will be conducted by scientists from the University of Sydney’s Charles Perkins Centre as well as researchers from the government’s Cooperative Research Centre for Alertness, Safety and Productivity, who will monitor the sleep cycles and alertness levels of the pilots and cabin crew.

According to the airline, four pilots and six members of the crew will be involved in the data collection by wearing activity monitors and completing sleep diaries, as well as filling out rest and alertness logs. Pilots will also provide researchers with urine samples from before, during and after the flight, which will track melatonin levels to establish individual body clock timing.

In addition, cameras will be mounted in the cockpit for the flight duration to record alertness cues and operational activities.

The tests are part of Project Sunrise, Qantas’ planned new direct flights from Sydney, Melbourne and Brisbane to London and New York, which the airline wants to implement by 2022.

“Project Sunrise is pushing the boundaries even further. We know we need to think harder about crew and passenger wellbeing when you’re airborne for almost 20 hours, and that’s why this research is so important,” Joyce said.

At present, the world’s longest direct flight is offered by Singapore Airlines, which links the city-state with Newark, New Jersey in 18.5 hours.

ECoR to install monumental flags at 22 railway stations in Odisha

One killed, another critical as trucks collide head-on in…