Yearender 2021: People who hogged headlines in Odisha this year 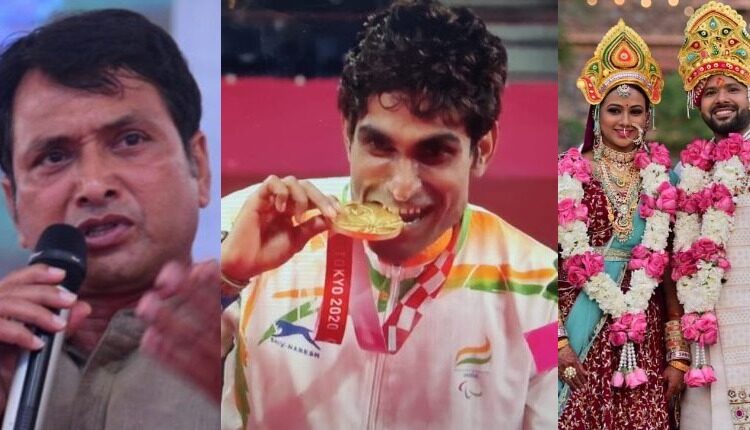 Bhubaneswar: The year 2021 was a rollercoaster for Odisha. While sportspersons Pramod Bhagat, Birendra Lakra and Amit Rohidas brought laurels to Odisha and the country, the state was in the news in national media for wrong reasons over the Mamita Meher murder case.

The two parties carried out bandhs, agitations and protest rallies across the state demanding the resignation of Mishra. The winter session of the Odisha Legislative Assembly was adjourned sine die, 20 days ahead of the schedule as Opposition members were hellbent on fulfillment of their demand, creating ruckus in the House.

Minister Mishra also faced stiff opposition from workers of the two parties as eggs were hurled at his car while he was heading towards an event in Kalahandi district.

The minister had eventually broken silence on the matter by issuing a statement.

The ace para shuttler from Odisha’s Bargarh district created history at Tokyo Paralympics 2020 as he became the first Indian to clinch Gold medal at the grandest sporting event. He defeated Great Britain’s Daniel Bathell 2-0 in the Men’s Singles SL3 Final to secure the top prize.

Birendra Lakra and Amit Rohidas from Odisha were part of the Indian Men’s Hockey Team that made the entire nation proud by winning Bronze medal at the Tokyo Olympics.

While Lakra played the important role of Vice Captain of the team along with Harmanpreet Singh, Rohidas, arguably the best first-rusher in the world, successfully defended numerous penalty corners for the team, not only in the Bronze medal match but also throughout the tournament.

Odisha-born Indian Foreign Service (IFS) officer Dinesh Kumar Patnaik was appointed as the Ambassador of India to the Kingdom of Spain.

Patnaik is a career diplomat of IFS with experience of over 25 years in a variety of interesting and challenging assignments.

The incident took place when he was being shifted from Choudwar Jail in Cuttack to Baripada Jail amid tight security.

In a bid to run away, he allegedly tried to snatch the service gun from the cop, who escorted him. To control the situation, a Sub-Inspector opened fire at the gangster.

He suffered bullet injuries and was rushed to the Balasore District Headquarters Hospital (DHH). He succumbed to injuries while undergoing treatment at the hospital.

Also read– From A Rickshaw Puller To Gangster: Curtains Down On Hyder’s Rein In Crime World.

He was initially suspended and later dismissed from Odisha Police for allegedly running a bar at Hotel South City in Patrapada, Bhubaneswar illegally.

The offence came to fore after the murder of Manish Anurag, son of senior journalist Navin Das.

Trouble mounted for Mahanga MLA Pratap Jena as his name was found in the FIR copy of BJP leader Kulamani Barala’s murder case.

Ramakant Baral, son of the deceased, alleged the involvement of 13 persons, including Jena, in the murder.

He said that his father told him the Law Minister had threatened to kill both of them.

Ollywood actor Sabyasachi Mishra and actress Archita Sahu tied the nuptial knot at Neemrana Fort Palace in Rajasthan on March 1 in the presence of selected number of invitees.

The centenarian teacher of Kantira village under Sukinda block of Jajpur district was loved by one and all for his selfless dedication towards eradicating illiteracy in the area.

On November 9, he received the prestigious Padma Shri award from the President of India for his contributions in the field of education.

Nanda Sir, who was a class-7 pass out, had been teaching children as well as elders at his chatashali (a non-formal school for primary education) for more than 70 years. Moreover, he was not charging a single penny for teaching.

Odisha-born Prativa Mohapatra was appointed as the Vice President and Managing Director of Adobe India.

She attended the Xavier Institute of Management in Bhubaneswar for her post graduation in Management, where she specialised in Systems and Finance.

No plans to bring back farm laws: Union Minister