10 Things To Know About Gopabandhu Das On His Birth Anniversary 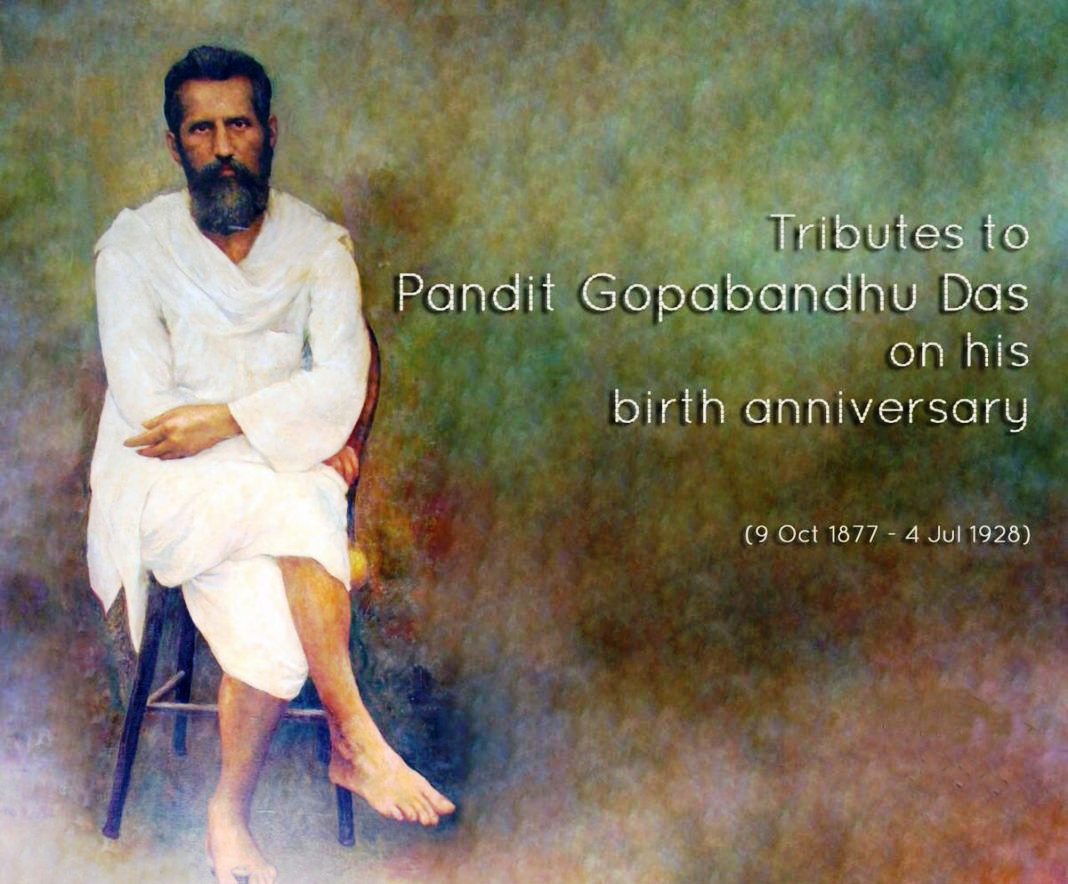 Bhubaneswar: Rich tributes were paid to legendary freedom fighter Utkalmani Pandit Gopabandhu Das on his 142nd birth anniversary today across Odisha. The day is commemorated as Gopabandhu Jayanti in the state.

Here are 10 things to know about Pandit Gopabandhu Das:

Utkalmani Gopabandhu is described as the Gandhi of Odisha for his immense contribution towards Odisha in field of social reform, journalism and literature.

His efforts to bring change in orthodox society, his role to expedite social movements, selfless service and educational reform earned him the title ‘Utkalmani’ (Gem of Odisha). Earlier, Odisha was known as Utkal.

He had started a voluntary organisation – Puri Seva Samiti – to help the cholera victims. Later, the movement led to setting up of a separate hospital for cholera patients in the district.

Born on October 9, 1877, to Swarnamayee Devi and Daitari Das in Suando village near Puri, he played a major part in making of Odisha as the first official linguistic state in India in 1936. His contribution for Odisha in creating the separate province will always be remembered to generations.

Gopabandhu attended Ravenshaw College, Cuttack, an educational premier of Odisha. During his study, he encouraged his friends to serve people and address social, economic and political problems. His passion for social service had posed as obstruction for which he failed in his B.A degree. He cleared the examination in his second attempt. Later, he earned LLB from Calcutta University.

4. Left profession as lawyer and dedicated life into social work

After completing graduation in law from Calcutta University, he practiced in Puri before moving to High Court in Cuttack. Later, he was appointed as the government lawyer in Mayurbhanj court. As he was not willing to continue the profession as the lawyer, he quit it and switched to social work.

5. A man who ignored his ailing son and moved to extend help to people in flood affected areas

As Gopabandhu was committed to serve poor and destitute, he rushed the flood-affected areas without making delay to provide relief, ignoring his ailing son.

“There are so many to look after my son. But, there are so many people affected in devastated floods. It is my duty to go there rather than attending my son here. Lord Jagannath will take care of my son,” he had said.

During his stay in Kolkata (Calcutta), he came in contact with Vande Mataram group that infused Swadeshi spirit in him. He was the first president of Congress party in Odisha. He had brought Mohandas Karamchand Gandhi to Odisha in 1921 to inspire people to join non-cooperation movement. He was jailed many times for the cause of freedom struggle. Veteran leader Subhash Chandra Bose called him the father of national movement in Odisha.

Gopabandhu believed that education can improve and bring change in society. After completion of primary education, he joined Puri Zilla School in 1893 where he met his teacher Mukhtiar Ramchandra Das. He was greatly inspired by the nationalistic values of his teacher.

He founded a school named as Satyabadi Bana Bidyalaya, at Sakshi Gopal in 1909. He took a vow to reform society through improving educational system in Odisha. He infused patriotism among students through education and taught them the values of human life and service to mankind.

8. A man who was living for others

Gopabandhu had lost his parents in his childhood days. He married Apti at the age of 12. She also left the world when he was only 28. After death of his wife and three sons, he left his daughters with his elder brother and gave his share of inheritance. He left his home and dedicated his life to service of mankind.

He was an eminent writer and poet. His works including Kara Kabita, Chilika, Dharmapada and Bandi Ra Atma Katha are testimony of his literary skills.

Gopabandhu was the pioneer of press freedom in Odisha. He was the national vice president of Lok Sevak Mandal. He had played a significant role in Odia journalism. He published a monthly magazine ‘Satyabadi’ in 1914. Later, he started weekly newspaper ‘The Samaj’, in 1919 which was once a leading Daily in Odisha. He served as the Editor of ‘Samaj’ till his last breath.