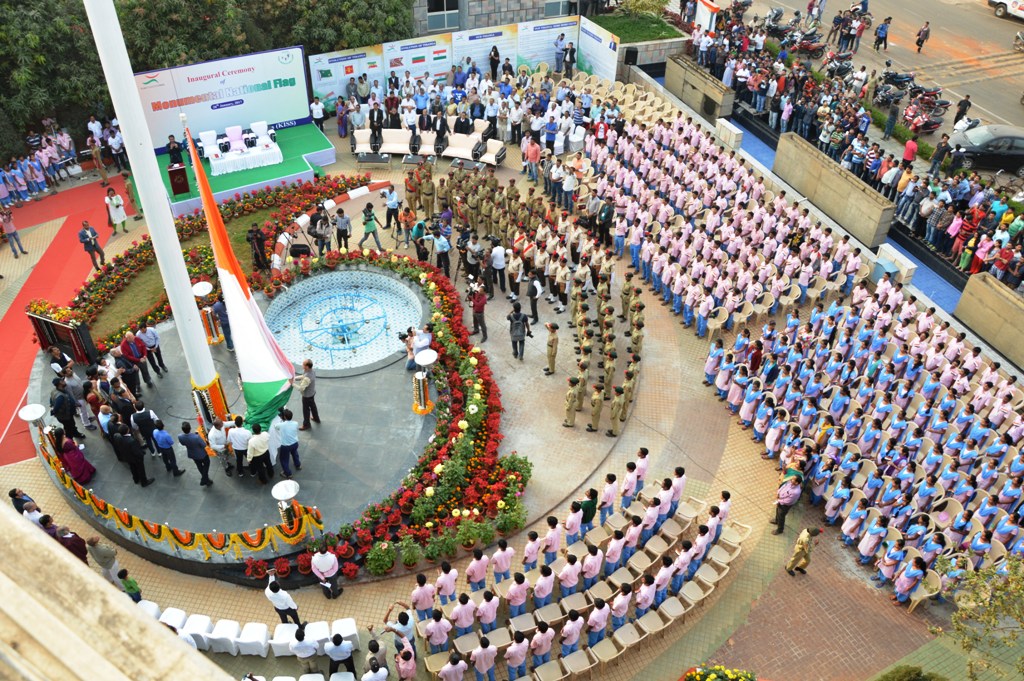 Speaking on the occasion, Jindal said, “Tiranga belongs to all of us equally. When a person displays his national flag, he rises above political, social or religious affiliations. The Tiranga unites us in diversity; it is every citizen’s pride”. He urged all Indians, especially the youth, to proudly display the Tiranga and show love and respect for our National Flag throughout the year. This is the first monumental flag of Bhubaneswar, which will inspire thousands of youths and students of KISS, as well, to go forward and contribute to the nation building, he added.

Dr. Samanta appreciated Jindal for honouring his commitment before the students made exactly six months ago during his visit to KISS last year. Mr. Jindal had announced to install this monumental flag during his visit to KISS on July 21, 2016. The monumental flag is made of knitted polyester fabric called ‘Deneir Polyester’. The Chakra of the flag is printed by using specialized printing process.

The concept of the monumental flagpoles in India was conceived and introduced by the founder of the Flag Foundation, Naveen Jindal on 23rd January 2009. The first monumental flagpole measuring 207 ft. high was installed at Kaithal, Haryana. Mammoth sized National Flag on such lofty height is known as ‘Monumental Flag’, which is not lowered at the sunset as they are adequately illuminated even during night. This was introduced after a policy decision by the Ministry of Home Affairs on 23rd December 2009, which allowed the National Flag to fly day and night on a flagpole of a height of 100 ft. and above with proper illumination.