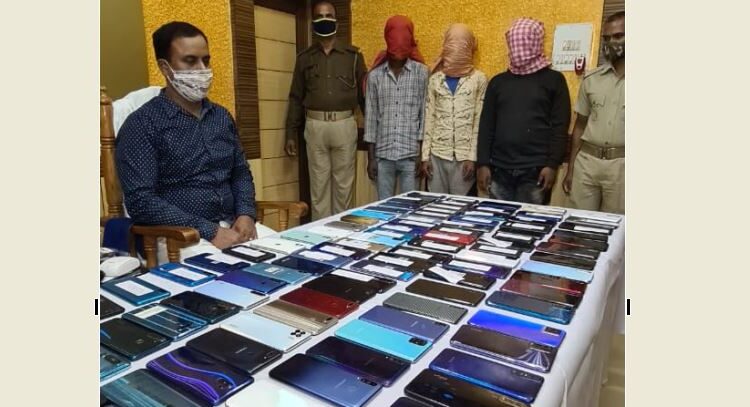 Bhubaneswar: The Commissionerate Police busted an inter-state gang of mobile phone snatchers in the Odisha Capital following the arrest of three youths from Jharkhand involved in the snatchings in different parts of the city on Saturday. Also, the cops seized 104 mobile phones including seven iPhones from the possession of the three accused.

Following their arrest, the three youths were forwarded to the court today.

Based on a complaint filed by one Prabhakar Goenkha, a criminal case was registered at Laxmisagar PS on December 31, 2020. As per the complaint, when Goenkha was standing close to Kalpana liquor shop some unknown persons snatched his iPhone Pro-12 and fled the spot.

After examining CCTV footages and based on information collected from sources, the Commissionerate Police identified three persons, Deepak Kumar, Kanchan Nunia and Ankit Kumar Pawsar from Sahebganj of Jharkhand state who was staying at a rented room near Fishery Lane, Chintamaniswar. Following questioning of the three youths, the Commissionerate Police searched the rented house of the three youths and recovered 104 mobile phones including the stolen iPhone Pro-12 belonging to Goenkha.

The three youths from Jharkhand confessed to theft of the 104 mobile phones in different parts of Bhubaneswar city such as Khandagiri, Nayapalli, Chandrasekharpur, Badagada, Sahidnagar and Mancheswar areas.

A police official said the case is now under investigation and efforts are on to detect the involvement of other persons. The recovered mobile phones are under process of retrieval of IMEI, the police official added.

19 dead, 20 injured as roof of crematorium collapses in Ghaziabad