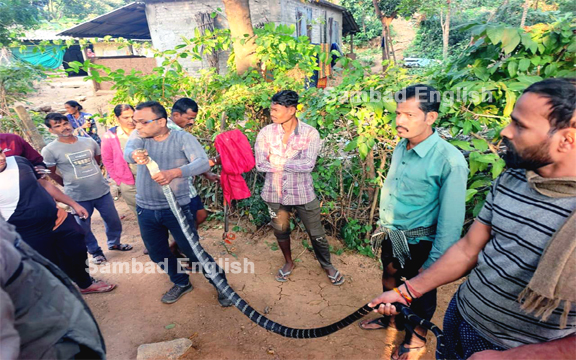 Nilagiri: A 12 feet-long king cobra was rescued today from the kitchen room of a villager at Kendunala located on the foothill Devagiri hill under Nilagiri subdivision in Balasore district.

The reptile entered into the household owned by Sanatan Singh in search of food, a forest beat guard said. The wife of Sanatan noticed the serpent in the morning when she came to the kitchen room for cooking. It was then making hissing sounds, the forest personnel further said.

Later, the family informed about it to a snake catcher and Panchalingeswar beat guard.

The beat guard Manoranjan Das immediately reached the village and captured the snake.

The king cobra was released in nearby Devagiri forest later in the day.