13 YEARS LATER, ‘IRON LADY’ SHARMILA REFUSES TO GIVE UP 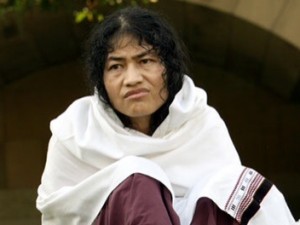 “Iron Lady” Sharmila Chanu completes Sunday 13 years of hunger strike that she began after the massacre of 10 people by Assam Rifles at a bus stand here.

Over the years, the “Malom Massacre” memorial at the bus stand in Malom, around six kilometers from Manipur capital Imphal, bears a deserted look, unattended with herbs and plants shadowing the site.

That day, the 10 victims were waiting for a bus when they were gunned down in retaliation for an ambush by some underground outfits.

The incident is where the journey of Sharmila Chanu began. Today, she is still on fast demanding the removal of the Armed Forces Special Powers Act (AFSPA) of 1958 in Manipur.

Sharmila has become an iconic figure, gaining solidarity and support from within India and beyond.

But the government is no mood to remove the AFSPA in Manipur and other parts of the country’s northeast.

And so Sharmila has resolved to continue her protest.

Sharmila says her fast is not an attempt to kill herself but a way of drawing attention to her campaign against what she says is a draconian law that affects ordinary people more than the insurgents.

“I want to live,” she says. “Had I attempted to take my own life, I would have done so.”

Sharmila, however, face charges of attempt to commit suicide. Every time she gets released, she is re-arrested as she continues her fast.

She flew to New Delhi to continue her protest at Jantar Mantar in October 2006 but was again arrested.

Since then a case has been registered against her in Delhi.

Although she has appeared in person in the court, she got no opportunity to defend herself.

Speaking to this writer after the Oct 30-31 court hearing, a perturbed Sharmila said: “I am never asked to sign any paper or document.”

Indeed, Sharmila feels her presence in the court is irrelevant.

“I am confused. I don’t even get to know or understand what is happening in the court.”

In August, an Imphal court said there was no evidence to back charges that she was fasting so as to die.

But Sharmila feels that the judiciary is not helping her in her fight. And the gutsy woman is willing to face the law. “I am ready to defend myself. It is about raising my voice against the act.”

Sharmila is happy, though, with the solidarity her cause elicits but does not want that she should be glorified.

“When I was released in August, I went visiting Ima Market (the women’s market in the heart of Imphal). Many people turned up, and there was a big crowd in the market and on the roads,” she said.

“I was touched and became emotional. But on a second thoughts I find that they were actually surprised and curious. They only wanted a glimpse of me.”

No remake of ‘Kaththi’, dubbed Telugu version to be released