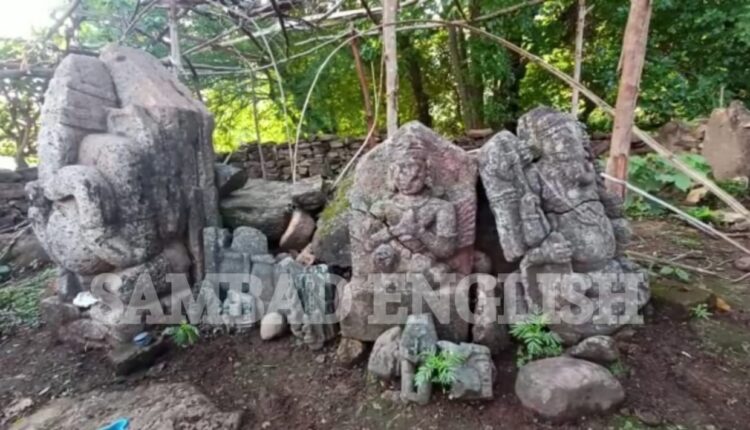 Chitrakonda: Remains of an ancient Shiva temple submerged in water for years due to construction of Balimela reservoir were unearthed at Swabhiman Anchal of Malkangiri district in Odisha.

The temple was discovered at Damaguda village in Panasput Gram Panchayat in Chitrakonda area after the water level at Balimela reservoir decreased in recent days.

Though the exact date and dynasty when the temple was built is obscure, it is assumed to have been erected during 14th century.

According to reports, the village houses only 10 families who have been residing there after being displaced due to the Balimela reservoir project.

A local source said that many forests, hills and villages were submerged in water during construction of the dam. The remains of the temple were found atop a hill under the water. People say that a shivling is buried in the Balimela reservoir.

Recently, the villagers had found a 5-ft-high idol of Lord Ganesha during agricultural work. Subsequently, many ancient statues of Garuda (eagle) and Lord Ganesha have been discovered adjacent to the village.

His study says that Jeypore king Malik Mardan Singhdeo had come to Chitrakonda to expand his empire. During that period, he had built a huge temple, which was said to be the second largest Shiva temple in Odisha. However, the monument got submerged in water during construction of Balimela reservoir in the year 1961. The wreckage is now visible after the water dried up.

According to another researcher, the Nilakantheswar temple was erected in the Chitrakonda area before the 14th century.

However, the Shaivite community is said to have resisted here after the Nandapur King Balob Narayan established the temple at Udadi area of Malkangiri district during his reign in 15th century.